The Final Summary Report for the 2010 primary election was released shortly before 7:30 this morning.  In the Mayor’s race it will be a rematch between current Mayor Charmaine Tavares and former Mayor Alan Arakawa.  Tavares had 7,307 votes—268 more than Arakawa who garnered 7,039.  Randy Piltz was in third with more than 1400 votes separating him from the top two vote-getters. 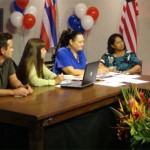 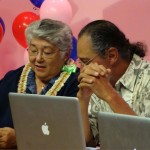 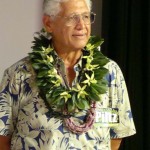 Click for full image. Mayoral candidate Randy Piltz waits to be interviewed after the 2nd Summary report is released. Photo by Wendy Osher. 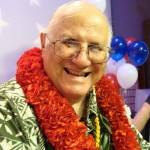 State Rep. Joe Souki wins his Democratic primary race. He meets up with challenger Dean Schmucker in the General. Photo by Wendy Osher.

In the contested Democratic race for District 8, incumbent Joe Souki advances with 53.2% of his party vote, defeating his challengers Kama, Cerizo and Hughey.  Souki faces Dean Schmucker in November.

With all precincts reporting in the District 13 House Race, Mele Carroll had a total of 3,049 democratic votes compared to republican challenger Meiling Akuna with 371.  Both meet up again in November.

With all 242 precincts across the state it will be Neil Abercrombie taking the Democratic gubernatorial nomination with 59% of the party vote or 136,321 votes compared to the 37 percent from Hannemann who had 86,676 votes.  Abercrombie will face Duke Aiona in the General Election on November 2nd.