The Maui made motion picture, “GET A JOB!,” makes its world premiere at the Hawaii International Film Festival next week.  The comedy starring Willie K and Eric Gilliom was filmed and produced entirely on Maui and is the first of several planned collaborations between Malama Pono Productions and Cicala Filmworks.

The story centers around William, Willie K’s character, a successful employment agent, whose career is jeopardized, when over the course of a 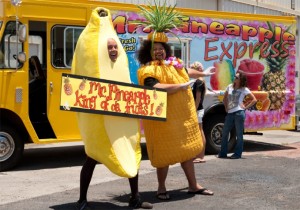 Click on image to view TRAILER. Photo by Aubrey Hord.

William’s problems are compounded tenfold by his longtime bridal shop employee girlfriend, Laura (Carolyn Omine), who wants desperately to be married and chooses this particular week to achieve her goal at all costs.  At week’s end, William finds himself jobless, homeless, car-less, girlfriend-less… but more resolved than ever to make the tough choices needed to find lasting joy, love and fulfillment.

GET A JOB was written and directed by Maui native Brian Kohne and produced by Stefan Schaefer.  The feature film also stars Oahu’s Carolyn Omine (a writer and executive producer of “the Simpsons”), and comedian and radio personality Augie T.

“The time is right for Hawaii to unleash a project of this nature. We have the talent in front of the camera, the experience behind it,” says writer-director Brian Kohne, “and “GET A JOB!” showcases our unique sense of humor in such a way that, I believe, is indeed accessible to mainlanders and internationals alike.  On the surface this homegrown film is a wild and outrageous ride, but beneath it beats the heart of our beautiful people and the daily struggle we face every day to live and work in the islands.”