Former Mayoral Candidate Chris Hart says he will remain neutral, refraining from endorsing either of the remaining two candidates in the race for Mayor.  The announcement was made this morning during an interview with Pacific Radio Group.

“Recently I was invited to meet with Charmaine Tavares and also with Alan Arakawa, and we discussed the issues and challenges facing our community, as well as matters of a lighter note.  Because I respect both mayoral candidates, and because I believe your vote is personal, and not subject to manipulation, I have decided to remain neutral,” said Hart during the radio program. 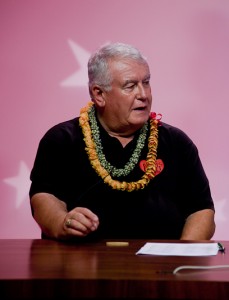 “Several of the other primary candidates have taken a position that that they’re going to endorse one candidate or another.  I intend to remain neutral,” said Hart.

Hart said that while he is refraining from endorsement, he believes that it is important for the public to exercise their freedom to vote for the most qualified candidate.  “It’s important that you vote and that I want you to be thoughtful and chose a candidate that you feel will move Maui County forward,” he said.

Hart has been vocal in his vision to implement the Maui Island Plan, but when asked which of the candidates were closer to his vision he was unsure.

“Ordinance 53 established that the council is supposed to have 365 days to complete their approval process.  But the politics of it has extended it from October 15, 2009, beyond October 15 2010.  So the plan is probably not going to be approved by the council until after the election.  I’m not sure, personally, I’m not totally sure which candidate would be better, honestly,” said Hart.

Hart also pointed out that while the process is non-partisan, the remaining candidates do not share his political party affiliation.

“I believe that in the context of the process, which is a non-partisan process, I’m a democrat, they are both republicans, I’m not going to get into the politics of it, but they have been nominated, and I feel in good conscience that I want to be neutral… but I feel that each person who is an American, should basically vote and vote for a candidate,” said Hart. 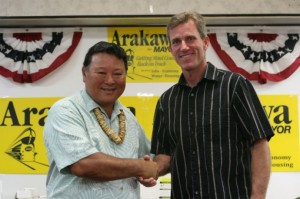 On another note, the Arakawa campaign has secured a third primary candidate endorsement, this time in Marc Hodges, who placed sixth in the primary race, earning 1,761 votes, or 6.1% of the vote.  Hodges said he has abiding respect for each of the candidates, but made his decision based on approach and strategy for tackling the county’s challenges.

During his campaign, Hodges stressed the need for a comprehensive new approach in Maui County government to regulation, zoning, and economic development.  He said that while Tavares has remained consistent in emphasizing the need to say the current course, Arakawa has often emphasized the need to change the county by streamlining county operations and cutting county operating costs.

Hodges further stated, “Neither Mr. Arakawa nor Ms. Tavares are perfect. Both have shortcomings; both have made mistakes as Mayor; and both have very admirable qualities and formidable skills.”

Incumbent Mayor Charmaine Tavares earned the most votes in the primary election with 7,307 votes or 25.4% of the vote; but only one percentage point separated her from challenger and former Mayor Alan Arakawa, who earned 7,039 votes or 24.4% of the votes cast.  The two meet up again on November 2nd in the general election.