Jessica Gerbode and Marcy Ricketts had never worked with onaga before. But their training and skills took them to the top of an HFM Foodservice Culinary Competition held Oct. 14 at the University of Hawaii Maui College’s Maui Culinary Academy. 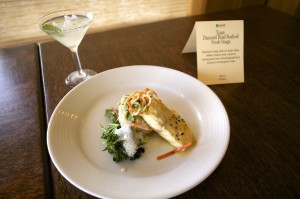 A poached onaga with coconut lemongrass rice and wilted greens with lemongrass foam was the top dish in an HFM Foodservice sponsored Culinary Competition for Maui Culinary Academy students. Photo by Glenn Poulain. 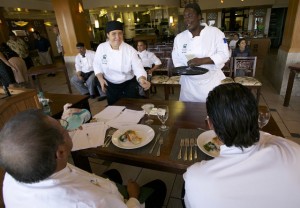 Maui Culinary Academy students Jessica Gerbode (left) and Marcy Ricketts explain their goals as students in preparing a poached onaga for the Culinary Competition sponsored by HFM Foodservice. They called the competition “an enlightening experience in which we reaped the benefits of having chefs we admire in the industry critique out dishes.” Photo by Glenn Poulain.

Gerbode and Rickets placed first among eight teams of Culinary Academy students competing in the event held as part of the HFM Traveling Culinary Cuisine project – a combination workshop on culinary networking, cooking competition and food show.  HFM sponsors the event at UH Community College campuses in an ongoing outreach effort to inform students of the range of opportunities to be found in the world of food products.

For the competition, 16 students in MCA’s second-year Garde Manger class teamed in a timed program to plan and prepare an entrée for judging.  Each team of two students was given a different protein product – beef, veal, pork, lamb, shrimp and onaga.

Team members were not told what their product would be until they entered the kitchen, then had a half hour to plan the preparation and an hour to complete the dish for presentation to the panel of four judges. The menu planning and preparation was observed and critiqued by the judges.

“I have prepared fish but not onaga,” Gerbode said.  “Never had an onaga before,” Ricketts said.

Being unfamiliar with the fish, they focused on the elements of the dish.

“One thing we didn’t want was to make a mistake on the fish,” Gerbode said.

“We wanted to keep it simple on the fish but for each accompaniment, we wanted to have it complement the dish,” Ricketts said.

“Marcy and Jessica never worked with onaga but they have been exposed to various fresh seafood items throughout their past semesters here at the Culinary Academy,” said Chef Instructor Kyle Kawakami. “We also spent a good amount of time talking about different proteins and their optimal cooking methods.”

It was close, with Judge Conrad Nonaka noting one point separated third from fourth place.

In assessing each dish and student team, the judges cited not only quality and presentation of the dishes but the students’ kitchen and communications skills in preparation.  Judges were Roger Stettler, executive chef at Four Seasons Wailea; Scott McGill, executive chef at Hula Grill Kaanapali; Ryan Luckey, executive chef at The Pineapple Grill Kapalua; and Nonaka, director of the Culinary Institute of the Pacific at Kapiolani Community College.

Speaking to the students at the close of the competition, Maui Culinary Academy Director and Program Coordinator Chris Speere congratulated the students on their success.

“It is fulfilling for the faculty to see the level of professionalism in the students that we see in the dishes produced,’ he said. “You delivered at a very high level today.” 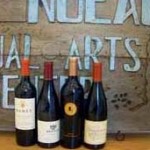 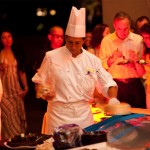