New Playground Equipment, Surfacing to be Installed at Pukalani Park

The removal of existing playground equipment at Pukalani Park began earlier this month and is expected to be completed by November 9, 2010.  Installation of new equipment and surfacing has been scheduled to take place December 20, 2010 to January 28, 2011. Total cost for the 3,975 sq. foot playground is estimated at $110,000. 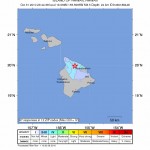 Third quake in as many days rattles Big Island