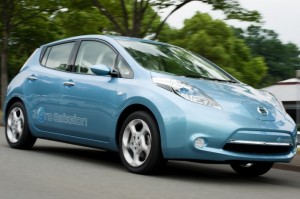 One of the hottest cars of the 2011 models, the Nissan Leaf, is already sold out and not a single one has yet to be delivered.  Dealerships have sold out the popular electric vehicle via preorders, and it is expected that not a single one will even reach showrooms as a display model when the car is delivered to American and Japanese customers in December.

Even with the run on Nissan’s supply, those looking for the hottest new electric vehicle since GM changed the Volt may be able to get one in 2011.  Less than one year from today, in October 2011, a new shipment of the car is expected to reach the retail level, but as a different model year.  Of course, preorders for the second shipment will likely be as thick and plentiful as the first 2010 model year Leaf.

That may be a boon for early adopter car enthusiasts, however.  Early adopters frequently turn into the world’s largest testing grounds, reporting bugs, issues, and problems that a few sample test cars and scores of Nissan employees couldn’t readily find.  Thus, those who can wait may own a better car, and may even score a better price.

Rumors circulated earlier in the year that the Leaf, which has a stick price of just under $33,000, will carry a battery pack worth more than $18,000.  Nissan expects that with a growing electric car industry, and economies of scale, the battery pack may quickly plunge in production costs to a fraction of the current price.  Buyers will be happy to learn that improving technology allowed the Leaf’s battery to maintain as much as 80% of its capacity for more than a decade.  The lithium-ion battery type is similar to those used in cell phones and laptops, though special and expensive considerations have been made to increase the battery’s life.

With a maximum range of 100 miles, top speed of 92 mph and a reasonable $33,000 price tag, the Nissan Leaf should be able to compete with more mid-range pocketbooks than Tesla’s Roadster or GM’s Chevy Volt.

A slew of new electric cars from all different manufacturers are expected to reach the market by 2015.  Toyota, Nissan, Tesla, GM, and Ford are all working on all-electric personal transportation to lead the new fuel-efficient world.  Nissan has announced plans already for three more production electric vehicles by 2014.