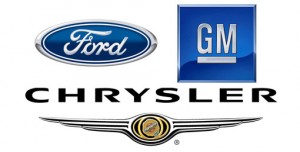 Analysts believe most of the upside is coming from car owners who feel they’ve waited too long before purchasing a new car.  Many have been waiting for lower prices and specials, while others have simply pushed off a purchase until economic conditions became more certain.  Even still, with impressive sales gains, total sales figures still lag the millions of cars sold before the financial crisis and subsequent “Great Recession.”

Leading the charge in growth were retail sales to individuals, with a 13% increase in October and 8% in September.  Previously, deeply discounted cars sold to governments and rental agencies helped keep cash flowing, but higher margin individual sales are keeping the Big Three growing.  Foreign automakers who offered fewer incentives to buyers, including Toyota Motors, saw sales decline in October.  Some believe Toyota’s sales slump is still partially to blame for braking recalls and other safety issues.

Incentives played a significant role in the success at Ford and General Motors with an average incentive of just under $2,500 offered against the average sales cost.  That number was 2.4% lower in September, mostly due to the quick sale of 2010 model year cars and the influx of 2011 models that normally occurs in October.  Less than half the cars sold in the United States in October were 2010 models.

General Motors’ sales are improving in 2010.  The company saw an increase of 22% through October against a general US automotive growth trend of 10% annual growth.  GM’s popular crossovers and heavier automobiles are leading the pack as other companies cut down on their heavier vehicles to produce small, more fuel efficient automobiles.

Ford came in second for 2010 growth with a 19% bump in sales to just under 158,000 vehicles.  Ford’s rise rides mostly on the smaller Focus and Fiesta models, which have dominated the low-end economy class.