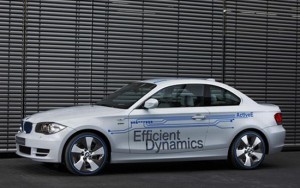 BMW has announced that it will invest a total of $740 million into two new electric vehicles, and their components and production.  The company will spend $560 million to retrofit and expand operations in Leipzig, Germany to build the ActiveE and Megacity, slated to be released in 2011 and 2013, respectively.  $180 million of the investment will be earmarked for components and material production, indicating some kind of new, proprietary technology rumored to be found in the Megacity.

The two new cars, ActiveE and Megacity will follow mildly popular electric prototypes and early market versions of the popular Mini Cooper.  For the past two years, the Mini E, as it is known, has been in the hands of a few lessees, tested among other daily drivers on both the East and West American coasts.

The ActiveE will soon get a similar leasing program after being debuted in front of a surprised audience at the 2010 Detroit Auto Show.  BMW hopes the car will fill the segment of the market that cannot fit into the much smaller Mini E.  The ActiveE will feature 170 horsepower and a range of 100 miles, and be able to reach a top speed of 90 mph.  Unlike the Mini E, which has room for only one passenger and one driver, the Active E will seat four and offer just under seven square feet of storage space, a considerable improvement over most smaller, all-electric vehicles.

Just as BMW hid the details of its first electric cars from the public, the Megacity, which will not debut until 2013, is being carefully shielded from the public.  Automotive industry experts expect the new car to feature a low profile, carbon body light enough to displace the additional weight of an all-electric drivetrains.  Rumors persist, however, that the car may come with a gasoline engine to be used with hybrid technology very similar to the GM Volt.

Perhaps the biggest problem facing today’s leading electric vehicle technology is the spread of charging stations, which only a few areas, on opposing US coasts, have bothered to install.  As a result, the New York Metro area and Southern California, both with ample charging stations, will be the grounds for BMW’s US-based testing, as well as the testing of any other electric automakers.