The lawn at the MACC theatre on Sunday night looked like a festival, and felt like a party. 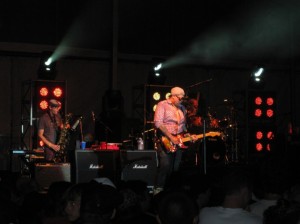 Sublime with Rome @ the MACC

If ever there was an impeccable, tasteful flashback to the 90’s, it was at tonight’s Sublime with Rome show. With a beer garden, a massive sound system, and one tune after another of classic hits, everyone in the audience was jumping up and down with sheer joy. And moshing like it was 1999.

Any critics of Rome Ramirez’s replacement of Bradley were hushed and humbled in the face of his talent and meticulous vocal range. The songs were short and sweet – perfectly executed nuggets of song, just the way you heard them on the radio.

Come to think of it, they were actually exactly the way you heard them on the radio – sound effects and all – because the band was playing along to a click track with programmed sound effects. It was a bit disorienting, and made you feel just a tiny bit like you were watching an elaborate staged lip synching production a-la-Britney-Spears (minus the cleavage and backing dancers).

At times the saxophone would be playing a line, and an entire invisible horn section seemed to materialize out of thin air. Other times electronic booms, crashes and sirens seemed to emanate from the invisible realms, whilst the 4 musicians on stage were obviously otherwise occupied.

Still, you’ve got to give them credit, they put on a tight, high energy, highly entertaining show.

They did some new material, written with Rome, but it was somewhat lackluster. Although you really wanted to root for these guys, and their vision of moving forward as a new band, it was obvious that this was just a trip down memory lane, and not so much a new and happening sound. But hey, give them props for trying.

The only thing really worth hearing was the reincarnation of your classic favorites from the 90’s. Nobody writes a Sublime song like Bradley Nowell. But others can deliver them with impeccable mimicry of Nowell’s vocal tone! (Enter: R. R.).

There were a few hilariously awkward moments, like when Rome called a friend out on the stage, who shouted some rhetorical attempt at a rebel-rousing cry into the microphone (“is everybody ROCKING tonight??!!”). He then turned and extended a smoking phatty joint to Rome, centerstage.

At which point, of course, a beefy security guy bum rushed the lead singer and his would-be pusherman, bodychecked the two of them with one swoop of his mighty biceps, and shoved them off stage.

This, I reasoned, must have been an attempt to protect those innocents in the crowd who were unaware that musicians – (gasp) – often smoke pot.

Rome sheepishly re-emerged moments later in a cloud of smoke, smirking as though he had just gotten detention.

There were several attempts at musical intensity, most of which imploded (like an ill-fated guitar solo that ended in Rome spinning in a drunken circle and nearly falling over).

Rome’s guitar solos were perhaps timid at best, but boy could that guy hold down an off beat.

Who knew so many songs in the world consisted of only 2 chords being chunked on the off beat?

Call it reggae ska. Call it a party. Or better yet, just call it Sublime.

~i~ Article brought to you by local musician and twinkly-eyed monkey, Maesyn (www.myspace.com/maesyn)
Please feel free to email Maesyn at [email protected] with suggestions for entertainment events you’d like to see covered by Mauinow.com

"Nutcracker Sweets" is a suite treat!

MY Messiah? - My oh MY! (Come sing along at the Holiday Mele!)