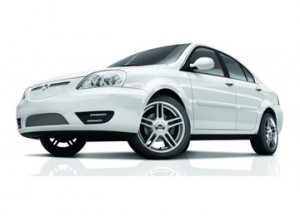 CODA, an upstart California automaker with connections to a Chinese battery company, has decided to delay its first ever electric vehicle until 2011.  The little known company first made a splash when it announced that it, too, would release an electric car at the same as larger auto giants were releasing their own, making it the underdog in a race to be the first major electric vehicle manufacturer.

The first of the new CODA line was originally scheduled to launch first in December 2010 as one of the first full all-electric production cars, but has now been delayed until third-quarter of 2011.

Officially, CODA maintains that the delays are the result of the company’s high standards, wanting to release the best quality car possible, but just last week, two Coda insiders, the CEO and the the VP of sales and marketing, resigned in a story that quickly rippled through alternative energy and transportation circles.

Steven Heller has stepped up fill the executive void as CEO, and announced his vision to sell 14,000 vehicles in 2011 to both individuals and fleet operators.  Hertz Rent-A-Car, one of the biggest fleet operators in the United States, will buy its own lot of 2011 CODA Sedans to use as rental units at California airports.  Potential purchasers can preorder a 2011 CODA Sedan directly from the company for a $500 deposit.

Delays are nothing new for CODA, which has pushed back its release date several times since the car was first expected to appear on city streets in 2008.  Several top electric vehicles have been delayed as well, including Nissan’s very own Leaf and Tesla’s Roadster.

The delays could dampen sales as the electric vehicle race continues on.  Many major brands including Telsa, Ford, and Smart USA, are expected to have their own new electric vehicles on the market by CODA’s new release date in 2011. By 2012, nearly every major automotive manufacturer will have an all-electric vehicle, with other independent automotive companies expected to join the industry by 2014.

CODA is currently working to raise some $125 million in third round financing after completing nearly $400 million in equity swaps and arrangements with a Chinese battery company.  The CODA all-electric sedan is based on the chassis of a popular gas-powered car currently roaming Chinese streets.