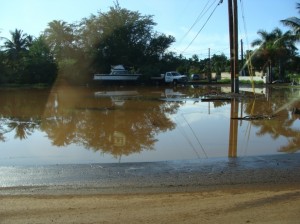 A Brown Water Advisory was issued today for central and south Maui coastlines following heavy rains and runoff.  The advisories extend from Waiehu Beach Park to Paukukalo in Central Maui, and from Kealia Pond to Kalama Park in Kihei.

The State Department of Health advises the public to stay out of flood waters and storm water runoff due to possible overflowing cesspools, sewer manholes, pesticides, animal fecal matter, dead animals, chemicals and flood debris.  Flood water and runoff also poses potential risks of Leptospirosis and other waterborne diseases.
The public should stay out of coastal waters when it is turbid and brown.
A similar Brown Water Advisory was issued for the entire island of Kauai because of heavy showers over the island earlier today.
ADVERTISEMENT