Fewer initial unemployment claims were filed in Maui County for the week ending Feb 12 than compared to the same week last year.

According to numbers from the Hawaii State Department of Labor and Industrial Relations, Maui County saw a 28% drop in filings from a year ago; the largest drop for all counties. Maui County also saw 8 fewer initial claims and 147 fewer weekly claims from the previous week ending Feb 5.

Overall, statewide initial unemployment claims decreased by 13.5%, with this week’s
total filings of 2,157 and filings during the same week in 2010 of 2,495.

In percentage changes, comparing the current week to the same week a year ago:
Oahu had a 14.5% decrease
Hawaii had a 4.1% increase
Maui had a 28.6% decrease
Kauai had a 15.3% decrease 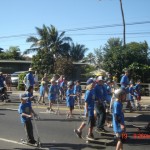