Simply stated, Kamehameha-Oahu was too big, too quick and too talented for Baldwin last night in the opening round of the state boys Division-I basketball tournament. 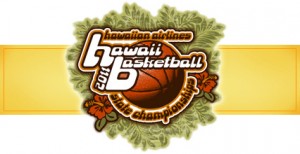 After Baldwin scored the opening basket on a steal and layup by Gabe Ross, Kamehamea went on a 19-2 run and the rout was on as the Warriors proved to be hotter than the steamy conditions inside the venerable Farringon High Gym.

Seemingly scoring at will, particularly in the case of 6-foot-6 senior forward Micah Christianson, Kamehameha raced to leads of 23-6 after one period and 50-14 at the halftime.

Christiansen scored all 21 of his points by intermission and hardly played in the second half.

When it was all over, Kamehameha had ridden a barrage of 13 3-point baskets to an 86-38 victory, handing the Bears their most lopsided loss in memory.

Kamehameha next meets its cousin from the Big Island in tonight’s quarterfinals.

The Bears, meantime, were relegated to a 3 p.m. consolation bracket game at Farrington against Roosevelt. The Roughriders squandered an early double-digit lead in suffering a 53-46 loss to Academy of the Pacific.

The Valley Isle’s two other entries open their bids tonight in games scheduled for 5 p.m. starts.

Fourth-seeded Lahainaluna faces a huge challenge of its own against Kahuku in Division-I at McKinley High. Kahuku opened the tournament in dominating fashion, capitalizing on its vastly superior size to rout Hilo 82-56.

It’s only fair to note that Kamehameha-Oahu was hugely favored to beat the Bears.

The Warriors, after all, won the state Dovision-I title two yeas ago and finished second to Iolani last season. And Christianson is recognized as the premier big man in the state.

It was the way they manhandled Baldwin that was so unexpected and impressive.

Baldwin appeared befuddled by Kamehameha’s defensive pressure tactics and the Warriors seemed to get a hand on every ball while also dominating the boards.

In other D-I action last night, Radford edged Mililani 52-50 in a battle of OIA rivals and upstart Academy of the Pacific overcame a 12-point deficit to defeat Roosevelt 53-46.

The tournament continues tomorrow and concludes on Saturday