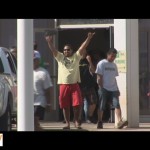 Some 200 union members from Maui Electric Company walked off the job on Friday. They were the first in the state to vote on a tentative contract finalized by IBEW Local 1260 officials and executives with parent company Hawaiian Electric. Photo by Wendy Osher.

The week-long electrical worker strike ends this afternoon with union members approving a new contract, according to our sources.

Details of the deal and confirmation of the strike end by union officials was not immediately available.

The new contract will take effect through October 31, 2013.

“We look forward to welcoming our union employees back to work,” said Dick Rosenblum, Hawaiian Electric president and CEO. “We sincerely appreciate the patience of our customers during this process,” he said.

The union went on strike on March 4, a settlement agreement was reached on March 7, and the ratification votes concluded on March 10.

IBEW represents approximately 1,280 workers (about 54% of employees) at the three companies, which provide electric service for Oahu, Maui, Molokai, Lanai, and the Big Island.

During the strike thousands of Oahu customers lost power during bad weather.  Here on Maui outages were reported in Kaanapali and Wailuku during the strike. 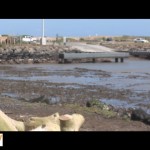 Tsunami After Effects: Wastewater Overflows in Lahaina and Paukukalo 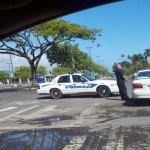