The final video submission, filmed and directed by Maui filmmaker Elliot Leboe of ACL Digital Cinema, features Matt Meola in 3.5 minutes of action-packed surf footage. It follows Meola as he travels in his truck through Maui sugar cane fields down to his favorite breaks, like Hookipa and Windmills. It also features Meola surfing breaks in Indonesia and Mexico, too.

The Innersection Surf Video Contest takes a unique approach to creating surf videos by bringing together surfers (working with filmmakers and editors) who create their own 2-3 minute surf movie and compete to be one of 24 final edits that makeup the final surf movie produced by Innersection. The competition runs in four cycles throughout the year (every two months, starting March 1st), and each round qualifies five new surfers for the final DVD released in December 2011 this year. 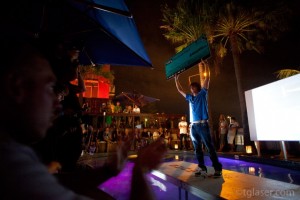 producer Taylor Steele, and co-producer Nathan Myers, and the most popular video section win the $100,000. Matt Meola’s video section won the 2010 contest, also making him the first Innersection winner, since this is the inaugural year for the contest.