Solo Sessions with Nathan Aweau at the MACC

Three-time Male Vocalist of the Year, Nathan Aweau performs on on Maui in a Solo Session Concert at the Maui Arts & Cultural Center. 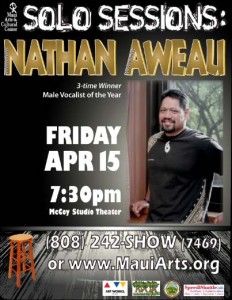 Widely known for his role as the second half of HAPA, Aweau also earned recognition for his solo career.

As a soloist, he won Male Vocalist of the Year, Song of the Year and Contemporary Hawaiian Album of the Year for his debut release, E Apo Mai.

His follow-up solo album, Kane’ohe, was released in 2008.

The intimate setting of the Solo Session will take place in the McCoy Studio Theater at 7:30 p.m. on Friday, April 15th.

Tickets are $25 for standard seating, and $45 premium for premium that includes a post-show meet-and-greet.  Applicable fees will be added on to the ticket price.  Tickets are available at the MACC Box Office, via phone at (808) 242-SHOW (7469) or online at MauiArts.org. 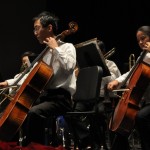