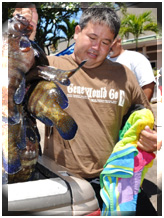 The event, now in its fourth year, includes participation from 60-80 divers who will compete in various categories including the most invasive fish caught.

The purpose of the event is to remove invasive species from the island’s reefs, including: roi or peacock grouper, to‘au or blacktail snapper, and ta‘ape or blue-line snapper. All three species were introduced to Hawaiian waters in the 1950s.

Event organizers have pledged to never let any of the fish caught in these tournaments go to waste. In years past, fish have been donated to the Maui Ocean Center in Mā‘ālaea to feed the marine life.  Some of the fish were also donated to an organic farmer for use as fertilizer.

Samples of roi are also collected by the Hawaii Division of Aquatic Resources to be used in ciguatera research.

The official weigh-in begins at approximately 11 a.m. on the event day, as the divers return to the Hard Rock Café on Front Street. A formal program, including the presentation of awards starts at 1 p.m.

The restaurant will remain open to the public and patrons are welcome to partake in the event’s festivities.

The deadline to enter the tournament is Monday, October 31. Entry forms are available at Maui Sporting Goods in Wailuku or can be obtained by request via [email protected] 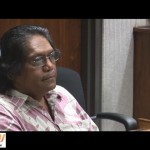 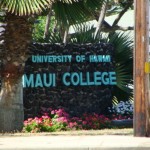