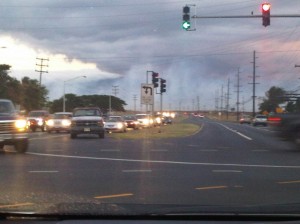 The Kahului brush fire could be seen burning in the area east of the Hana Highway, Dairy Road intersection. Maui Now photo.

Fire officials called a 10 acre blaze near Kahului Airport under control at 8 p.m. on Saturday, October 29, 2011.

The fire was first reported at 4:39 p.m. on land makai of the Hana Highway.

HC&S has yet to assess potential damage to property.

Bulldozers are reinforcing the control lines, according to authorities.

Maui firefighters remain on the scene of a brush fire that has already burned 10 acres near the back side of Kahului Airport.

At around 6 p.m., motorists traveling on Kala Road on the back side of the Airport were being turned around by Maui police stationed near the heliport.

Among those responding to the scene include Engine-10, Tanker-10, Engine-2, Mini-2, Tanker-14, and the department’s Air-1 helicopter.

The fire was not contained at last report. 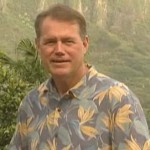