Freeradicals Projekt performed a free afternoon concert at Baldwin Beach Park on Sunday, November 27th. The show was entitled “Gratitude,” and was dedicated as an act of thanks from Freeradicals Projekt to the Maui community for their support of the band during their first year together.

The band played until 5:30 p.m. when DJ’s Del Sol, Keegan House and Dave Mason took the floor alternately for the rest of the evening in Baldwin Cove.

Of nearly 300 attendees on the beach, few went in the water as high speed winds caused uninviting and choppy ocean conditions.

Free Kona Red wellness drink  samples were given out at the event as another gift of gratitude from the band. 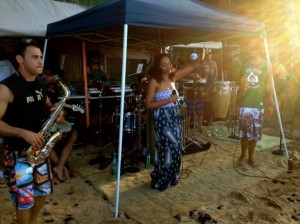 Beachgoers and fans dispersed by whistling Freeradicals songs on the way to the parking lot as night approached. The park closed at 7 p.m.

The band’s next performance will be a benefit for “Prayer Rock Foundation” and “Source V: Circus of Dreams” on Sunday, December 11 from 12 to 10 p.m. at  The Sugarman Makena Estate near La Perouse Bay.

Tickets are available for pre-sale for $15 at The Wine Corner, Request Records, and The Tiki Lounge. Tickets at the door will be sold for $20 and parking will be available at Mulligan’s On The Blue in Wailea, with a shuttle service to the event. 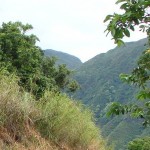 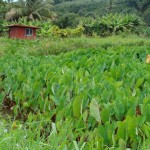