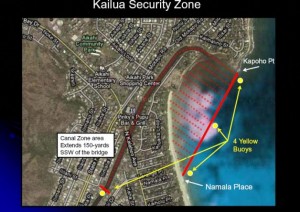 The US Coast Guard in Hawaii will enforce a temporary security zone in the waters of Kailua Bay in anticipation of the arrival of President Barack Obama.

Officials with the US Coast Guard say the temporary security zone is necessary to ensure the safety of the President and his official party.

“Recognizing the zone may inconvenience residents and recreational users,” said LCDR Scott Whaley, “we have coordinated closely with the local community to minimize the impact and still meet the security requirements for the President of the Unites States during his stay on Oahu.”

In addition to the security zone, patrols of the area will also be conducted under a coordinated effort between the Coast Guard, the Honolulu Police Department, and the Marine Corps Base Hawaii, under the direction of the US Secret Service.

The temporary law prohibits any unauthorized person or vessel from entering or remaining in the security zone.  Any person entering the zone without the permission of the Coast Guard Captain of the Port is subject to a penalty of up to $40,000 for each violation or a criminal penalty resulting in imprisonment of up to 25 years, and a fine of up to $250,000. Vessels found in violation may also be seized and held liable for any monetary assessments.

The temporary zone includes a portion of Kailua Bay, from Kapoho Point to Namala Place Road near the Castles surf spot.  The zone also includes the adjacent channel beginning near Kapoho Point to a point extending the channel way to approximately 150 yards south of the North Kalaheo Avenue Road Bridge.

An orange “boom” and yellow buoys will also be placed on the water and in the channel for visual references of the zone. 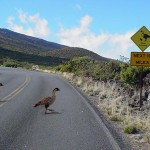