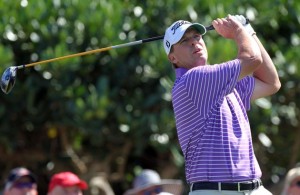 Steve Stricker plays a shot on the 1st hole during the third round of the Hyundai Tournament of Champions at the Plantation Course on Sunday. (Photo by Sam Greenwood/Getty Images)

Steve Stricker has learned to rely on his patience when he falls out of his comfort zone, like he did on Sunday at the Hyundai Tournament of Champions.

After a slow start, it was patience that steered Stricker back to his birdie ways, finishing the third round exactly where he began the day – enjoying a five-shot cushion. Thanks to four consecutive birdies to end his round, Stricker produced a 4-under 69 to put him at 19 under for the tournament. That’s five shots ahead of three players – Webb Simpson, Martin Laird and defending champ Jonathan Byrd.

Stricker will be paired with Byrd in Monday’s final group at 11:05 a.m. (Play begins at 8:55 a.m). While Byrd won here last year, Stricker will be looking for his first PGA TOUR win in the state of Hawaii. He’s 0 for 17 at the Hyundai Tournament of Champions and next week’s Sony Open in Hawaii.

With a five-shot lead going into Sunday, Stricker saw it reduced to one by the 14th hole. At that point, he had just one birdie and was even par on his round, while his pursuers were making things happen.

“It was a struggle today,” said the top-ranked player in the 27-player field at No. 6. “Not a lot of good things happened, but I stayed patient, I really did . . . even though I wasn’t making any birdies and it felt like everybody else was. I just stayed patient and after my chip shot at 16 it felt like things were going to kind of turn my way and it did. So it was a good finish and it has put me in a good position.”

In addition to his chip-in from off the green at the par-4 16th, Stricker birdied the par-5 15th, and finished up with birdies at the par-4 17th and par-5 18th. Meanwhile, Simpson, his playing partner, was losing ground, as he played the final four holes in even par.

Simpson also shot 69, while Byrd and Laird carded 6-under 67s.

With the momentum Stricker built on Saturday, it was tough seeing the 5-shot lead dwindled to one.

“I knew it was going to be tough, I mean, it always is,” Stricker said. “When you’re leading the golf tournament it’s just hard to keep that momentum. I had such a good day yesterday that when you’re not making birdies you feel like you’re letting things slip away, and that’s what I was feeling like, I felt like everybody was coming after me and I was kind of coming back to the pack.

“Fortunately we had a good finish, but we have one more day, it’s not over yet, and I have to go out and play good tomorrow.”

Through three rounds, Stricker now is 13-under par on the five closing holes at The Plantation Course. 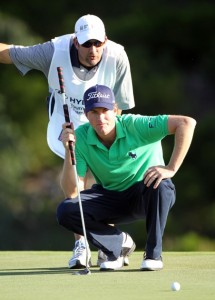 Although Simpson was disappointed he didn’t make up ground on Stricker, he is pleased with his game.

Meanwhile, Stricker said he’s prepared “to grind it out and fight hard” on Monday.

“You always hope to get off to a good start and make birdies, but if not, I going to keep telling myself the same thing and hopefully I have a lead and I don’t make it so tough on myself that I have to birdie the last four holes coming in, but we just have to see what it bring us.”

Five of the last six times Stricker has had a 54-hole lead he’s managed to convert it into a victory. The last time he failed to do so was last year when he struggled on the final day as a co-leader and finished fourth.

Course knowledge, from year’s of playing here, has been a major factor for Maui regulars like Stricker and Byrd.

“I think just playing it so many times,” Stricker said of the par-73 Plantation Course. “Understanding the little things about this course, and there are a lot of little things. The greens are pretty severe, you have to know where to miss it, know where to hit it, it’s a tough course and there’s a lot of trickery to it and I guess I’ve become comfortable with it because I play here so much.”

“Fortunately this is my fifth year here so I feel like I’ve got a good feel for the golf course and how to play it and how to prepare for it. It’s hard to putt on this golf course, there’s just so much break, and the grain, and the mountains, and the ocean. I think just being able to judge the greens and the distance has been the key, but you have to keep coming back to figure this golf course out.” 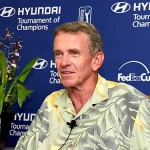 Stricker in Command at Hyundai Tournament of Champions