***An UPDATE is now posted with information on the identity of the woman involved in this crash and the circumstances surrounding the accident.

A 57-year-old Hana woman suffered fatal injuries when the vehicle she was in traveled off the Hana Highway near Nahiku, dropping about 5 feet off of the makai side of the roadway, said Maui police.

The woman, who was a passenger in the Jeep Wrangler, was not wearing a seatbelt, and was ejected from the vehicle.

Authorities say she died after being transported to the Maui Memorial Medical Center.  The woman’s identity is pending notification of next of kin.

The Jeep was driven by a 39-year-old man who was traveling toward Hana near mile post 27, about 2.5 miles east of Lower Nahiku Road.

The driver was wearing his seatbelt and was treated and released from Maui Memorial Medical Center for injuries.

The man was then arrested under suspicion of Negligent Homicide in the first degree, and released pending further investigation.  Maui police say the involvement of speed and alcohol are suspected.

Authorities closed the Highway at around 4 p.m. and alternated traffic using the east bound lane of the Hana Highway until about 10:30 p.m.

The accident was Maui County’s first fatal crash of 2012, compared to none at the same time last year. 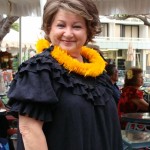