By Perri Kaminoff and David Kvasnicka 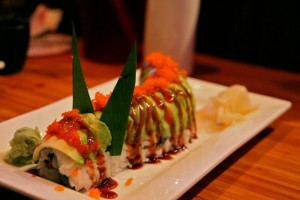 Caterpillar roll at the Ale House. Photo by Madeline Ziecker.

A one-of-a-kine, the Ale House in Kahului tends mainly to Mauians, and while it already wears many hats, it now has a new one.

It’s a family-style restaurant featuring 65 menu items, has a sports bar, karaoke, live music, and a DJ booth. Its latest addition is the KAH Sushi Bar.

Lately, there has been a bizarre trend for restaurants of any kind to install sushi bars, whether it makes any logical sense to do so or not. The Ale House is one example. Logistically, sushi is a hard business to pull off well because your primary inventory – expensive, top grade raw fish – has a very short storage life. At the same time, an experienced sushi chef can easily cost an owner $70,000 per year. Somewhere in that equation, a profit needs to be made. 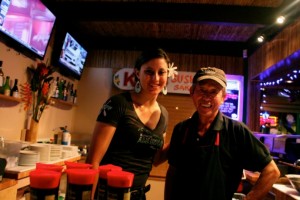 Cheery servers, technicolor specials menu, high stools, and frosted plastic menus create a casual and fun atmosphere at the Ale House. But the making of the sushi is serious business. The sushi bar is stacked with three experienced and talented sushi chefs. Chef Harry of Harry’s Sushi Bar in Wailuku brings 14 years of experience to the bar, and is teamed up with fellow career sushi chefs Tim Sawamura and Hiro Takanashi.

Classic rolls such as the California and Spicy Tuna have been handled as well as should be expected. The Hawaii roll is sprinkled with macadamia nuts and brings an island-edge to the dish. The seared tuna appetizer was glazed in a light sauce to allow the taste of the tuna to come through. So, the sushi definitely passes the taste test. 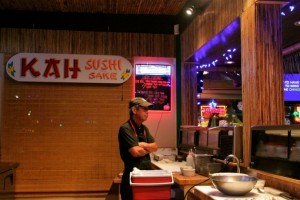 Owner Brad Sundin emphasizes their sushi strategy as “quality over quantity.” The fine Japanese plateware, grade-1 fish-only policy, and an impressive menu of 17 hot and cold sakes suggest that the strategy is being taken seriously.

A fan of sushi himself, Sundin saw a lack of good sushi in the Kahului area. So, Halloween night he opened the sushi bar for the first time. Since the opening, Sundin says he hasn’t advertised the change, but insisted the bar has been doing fairly well ever since. 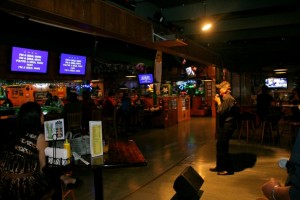 In any case, a sushi bar in a place like the Ale House presents some interesting opportunities, like getting a side of fries with your sushi (where else can you do that?), and covering your bases as far as people’s tastes go in a group or date situation (i.e. relatively healthy sushi beside relatively unhealthy bar food). 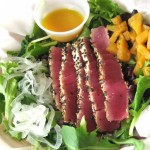