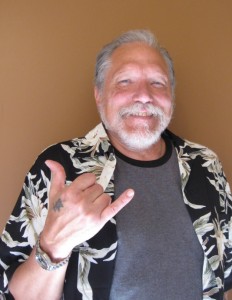 The legendary musician is best known for his seven years with Jefferson Airplane and his subsequent long running band Hot Tuna. He’s ranked #54 on Rolling Stone’s list of 100 greatest guitar players. Among his fans that number is substantially higher.

Kaukonen began performing as a teenager in the 1950s. He’s most closely associated with bassist Jack Casady, a childhood friend. Their sound was first noticed in the San Francisco Bay area in the 60s. He and his family have called Ohio home since the 1990s, when he bought land there. He and wife Vanessa operate the Fur Peace Ranch (“We grow guitar players”) in Pomeroy.

Now 71, Kaukonen still plays more than 150 dates a year. These are mostly smaller venues like the 400 seat Iao Theater, where the atmosphere is more intimate and the sight lines are better.

“The Captain,” as he is affectionately known, is on Maui for two weeks, based at the Royal Lahaina Resort. There he’s offering guitar and song writing classes under the ranch’s banner. The website gives details of upcoming concerts and other workshops: www.furpeaceranch.com

In person he’s a big man with bold tattoos and a shiny gold tooth. He’s wearing a brand new aloha shirt; and though he doesn’t know how to pronounce it, knows how to give a big shaka greeting. He’s relaxed, at ease and happy to be on Maui. He was here with his family last year and hopes to return again, “Especially when it’s winter in Ohio.”

It’s easy to watch his work evolve through the years on YouTube. See him play the Hesitation Blues with Casady when they were both young men.

And see the pair and an unnamed mandolin hotshot play of the same classic tune on Minnesota Public Radio in 2009.

In the opinion of many, he’s only gotten better. 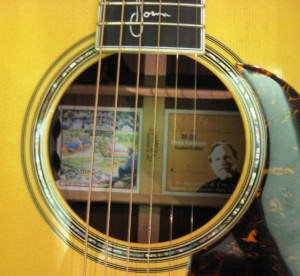 The Martin Guitar Company offered the limited edition signed Jourma guitar. It was a sell out. Susan Halas photo.

He’s so good in fact that world famous guitar maker Martin named a guitar after him. The Jourma, which came out as a limited edition a few years back, promptly sold out. If price is no object, there’s one listed online asking $5,100.

The Hot Tuna gang composed of Kaukonen, Jack Casady, Barry Mitterhoff and Skoota Warner have a new album out titled STEADY AS SHE GOES. Kaukonen said the CD is the group’s first studio recording in 20 years.

Ticket sales are brisk for the upcoming event. The warm up act is a solo acoustic guitar man Chris Smithers who JK says is “highly recommended.” 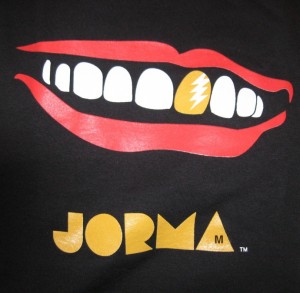 Or at the door the night of the performance if available. 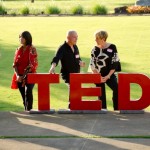 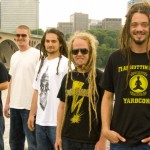