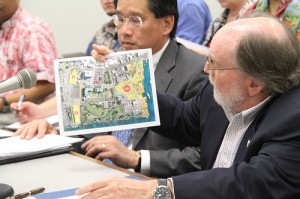 Governor Neil Abercrombie met with lawmakers yesterday to urge the passage of a settlement proposal with the Office of Hawaiian Affairs to resolve a large portion of ceded land claims.

The proposal calls for the conveyance of approximately $200 million worth of lands at Kaka’ako Makai from the state to OHA.

“I believe this agreement is pono and benefits both Native Hawaiians and the entire State of Hawai’i,” said Gov. Abercrombie as he testified Monday before two separate joint legislative hearings.

The identical measures, House Bill 2521 and Senate Bill 2783, are based on an agreement made in November 2011 between the state and OHA.

Under the agreement, no cash would be paid.  In exchange for the land, any and all claims regarding OHA’s share of ceded land receipts would be resolved for the period extending from November 7, 1978, through July 1, 2012.

The House committees on Water, Land, and Ocean Resources and Hawaiian Affairs deferred the measure until Wednesday at 11:15 a.m.

The respective Senate committees on Water Land and Housing, and Hawaiian Affairs also deferred SB 2783 for decision making until later this week.  They are expected to resume discussion again on Friday at 2:45 p.m.

The agreement is subject to legislative approval. 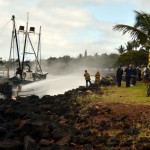 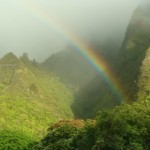