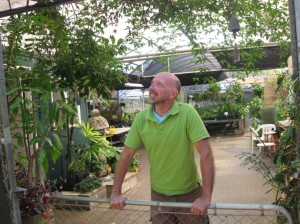 Alan Davidson stands at the entrance to his 14,000 sq ft shade house in Haiku. He is open to the public by appointment. Susan Halas photo.

Alan Davidson is a familiar face at the Kaahumanu center where he displays a small assortment of interesting plants twice a week. The transplanted New Yorker is a partner in one of the few nurseries on Maui that is open to the public.

What’s even more enticing to the plant lovers is that Davidson specializes in unusual and interesting plants that even old timers may not have seen. There’s lots to see and admire in his greenhouse on Pololei Place in Haiku.

Though just about everything can and grow on Maui, strangely enough there are very few places here where you can see a really good array of product, much less talk with someone who knows what it’s all about.

Davidson is somebody who knows his plants and dispenses a wealth of knowledge and green-lore in an easy, affable manner.

Davidson and his partner, Norman Mizuno, operate Ha’iku Maui Orchids, Inc. They moved to Maui in 1998 when they “got tired of city life” in New York. They bought and began operating a nursery in 1999. There are thousands of plants growing in the 14,000 sq ft shade house. 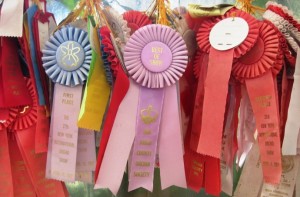 Many awards hang over the packing table. Susan Halas photo.

Recently, since Mizuno decamped for a high profile job on the mainland with a Japanese orchid wholesaler, Davidson has been swamped with the responsibilities of keeping it all going himself.

In spite of the day-to-day chores, there’s a dense row of ribbons, including a Best-In-Shows and other awards from recent big mainland orchid events, hang over the shipping bench. Certainly it’s an impressive display for a small Maui nursery. 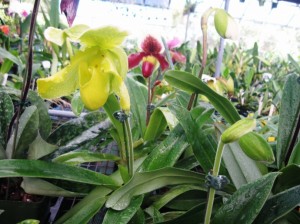 Lady Slippers could be the next big thing in the orchid world. Susan Halas photos.

Try the Lady Slipper family- these have Jack-in-the Pulpit style blossoms that stay in-bloom and look fresh for five or six months at a time.

Davidson thinks Lady Slippers are starting to nudge out Phalaenopsis (sometimes called the Butterfly Orchid) as the choice of designers and interior display gurus at the high-end showrooms and shelter magazines like Architectural Digest.

And sure enough, here’s the Lady Slippers — eye catching, colorful, and looking like the “next thing.” ($20 and up, depending on size and kind). He was also keen on a fleshy-looking orchid in profuse bloom. The plant displayed a light honeydew (pale celadon green) coloration and a palm-like foliage. This is a Lycaste, a native of South America. In a seven inch pot it costs $75. “It used to be hundreds,” he said.

“Since big-box stores and chains like Trader Joe’s started to carry orchids, interest has come up and prices have come down,” he observed.

At best, lower prices are a relative thing because, “Orchids are still mostly a luxury item.” 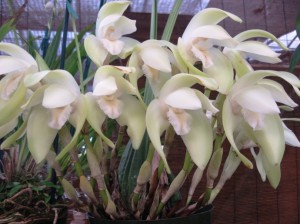 Still it’s free to look, and there are many curious, a little less costly, and equally appealing items in world of “edibles.”

You’ve heard of edibles. They are all the rage now. Edibles are something, however small, you grow yourself and end up eating.

Are you growing sprouts; tomatoes in a container, mushrooms in the closet? Are you saving scraps for compost or cultivating your single papaya tree on your handkerchief size ground-floor condo lanai?  Well, you’re in with the In-Crowd.

At Ha’iku Maui Nursery these aren’t just any edibles or drinkables. These are things you might actually want to try, such as: the Brazilian cherry, a  cherry look-alike that will grow in Hawaii, ($7 in 5” pot)  and even more exciting for the would-be fruit eater-grower is the small blueberry bush that doesn’t need cold weather.

Blueberries are the “IT” food this year, along with the coconut (as in coconut water) blueberries are the stars of the edible-drinkable universe. They’re small, delicious and truly good for you. And, oh yes, they’re expensive too.

It was not been possible to grow blueberries here in the past, because like cherries, they used to need winter. But now Davidson said there is a blueberry bush that will grow in tropical Hawaii and tastes good too.

Unfortunately it is sold out at the moment, but it’s possible to get on the waiting list. (2 gallon pot for $30.) 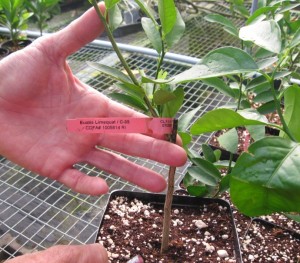 The Limequat is a combination lime and kumquat on a dwarf citrus root stock. Susan Halas photo.

Still hungry? Try the Limequat, a grafted citrus combo of lime and kumquat on a dwarf root stock. The Limequat costs $20 a pot and is in stock.

In the non-edible department the nursery has some of the older favorites such as the fragrant Pakalana and the showy Green Jade. Flowers from both vines make extraordinary leis. (Pakalana 20 6” pot, green jade $25 in 1 gallon.)  He also has gardenia and hibiscus varieties. From time-to-time bonsai trees are a bit of a sideline, but right now, not many are available.

One of the most unusual specimens at the nursery is an airborne lichen which looked a lot like a moss but of a bright vivid yellow instead of green. This plant grows low, flat and dense. Davidson said the wind had blown it on the shade cloth covering the nursery where it had accumulated. He decided to try to cultivate some of it, because he thought it would be attractive and unusual grown on bark backing like orchids. He says a few flats were in progress and they were quite distinctive. 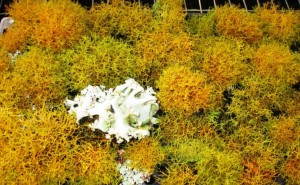 A showy plant that will wow your kids is the flycatcher Nepanthes. When most people think fly-catcher they think teeny-tiny. No way. These plants have outsize hanging bulbous blossoms that eat flies, gnats and anything else foolish enough to come in their path. They look like a Dali painting. Small one are they are real cuties, but the big ones are a surreal eyeful. ($25 big, $9 small.) 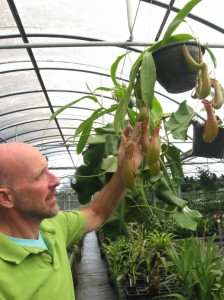 Davidson shows off the blossoms of a giant hanging flycatcher that looks like a Dali painting. Susan Halas photo.

Alan Davidson is at the Kaahumanu Center on Wednesdays and Fridays (8-3) with unusual plants and free plant advice. His nursery Ha’iku Maui Orchis is open to the public by appointment at 2612 Pololei Place in Haiku. Call 573-1130. Visit on line at www.haikumauiorchids.com. 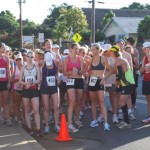 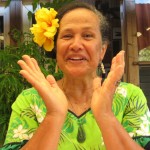