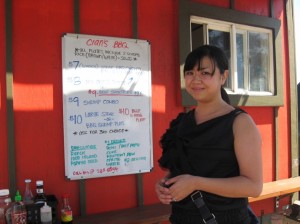 Food carts and lunch wagons are the latest foodie trend on the mainland.

Not to be outdone, central Maui has its own local pit stops conveniently located in one spot harbor side on the Kahului Beach Road. Drive by midday and you’ll see a variety of wagons and trucks, as well as a continuous stream of vehicles pulling in and out. Though these establishments do little advertising they serve hearty plate lunches and have a solid reputation with residents and visitors.

Maui Now checked out Cian’s BBQ, a box like structure on wheels painted a gypsy orange and Gerste Shrimp a little farther down the strip, housed in an oversized van with its name writ large on the sides. Both offer simple menus, fast service, and generous portions.

“If you want to know where to eat, just ask a taxi driver,” said Ron Thompson of La Bella Taxi, who left his car at the curb as he stepped up to the window at Cian’s.  The lunch wagon offers a simple menu with a variety of steak, chicken and pork ribs combos. Pick one – it’s $7, pick 2 – it’s $8, pick 3 and it’s $9. Add another buck or so for a beverage and presto, you’re not hungry any more.

Thompson ordered the combo ribs & chicken and was generous with his praise. ”Lots of guys say they cook ribs,” he said, but these guys really know how to do it.” Only moments later a hot and hefty box appeared with his meal.

All entrées come with two scoops of white or brown rice, and a side salad with a choice of dressing. Thompson’s lunch (2 choices with a Pepsi) came to $9.

Also waiting to pick up her order was Ming He, on her lunch break from the Maui Medical Group. She said she likes the food and usually stops by about once or twice a month. “It’s worth the drive from Wailuku,” she said. She picked up two big plates and was gone in a flash.

Asked to name their best seller Chris Alejo, the man at the window, wasn’t sure. “I don’t know what they like best, all I know is we go home empty every day. It all sells.” 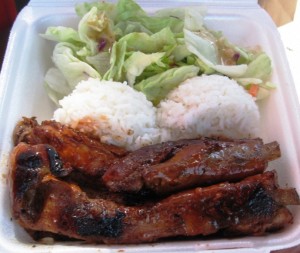 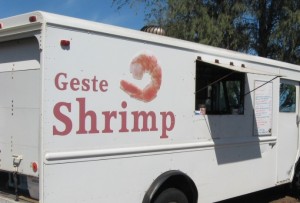 Geste Shrimp has 182 online reviews, most of them rank it five stars. Susan Halas photo.

Anchoring the other end of the strip is Geste’s Shrimp; it’s housed in a big white van with a bright pink shrimp painted on the side.  Though it’s a humble set up, you’d be surprised at its popularity. The roadside is ranked number one for shrimp on Maui by Yelp, the review website. It has 182 eater reviews and the overwhelming majority of them gave it the highest rank – five stars.

Not surprisingly the menu is shrimp and more shrimp, each plate is priced at $12, all drinks are a dollar. Service is fast and friendly.

The day Maui Now stopped by, Joanna and Justin Cord vacationers from Idaho had driven over from Kihei, drawn by the ratings on Yelp. “We weren’t quite sure how to get here, but we didn’t want to miss it,” they said as they waited for their orders. They didn’t have long to wait and they were not disappointed.

Jerome Mooki, who helps out at lunch time was standing by the menu. He said that all the shrimp plates are good but the Hawaiian Scampi and Spicy Pineapple Shrimp seem to be  among the favorites with customers.

Indeed the Yelp reviews were enthusiastic about both: “So freaking gooood,” rhapsodized one, “OMG ono, why haven’t I stopped here before? 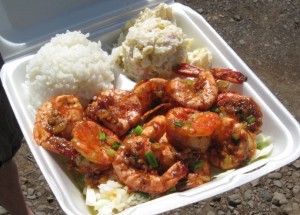 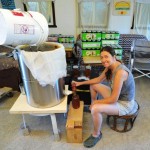 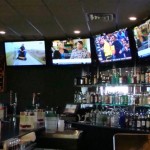