A man suffered cuts to his head, back and legs after falling about 40 feet from a waterfall in the area of Twin Falls on Tuesday afternoon.

The man was carried out of the stream area by fire personnel, and transported by ambulance to the hospital for treatment of non life-threatening injuries.

The incident was reported at 4:24 p.m. on Tuesday, February 14, 2012.  Among those responding to the scene were fire and rescue crews from Engine 2 in Paia, and Rescue 10 in Kahului. 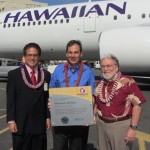