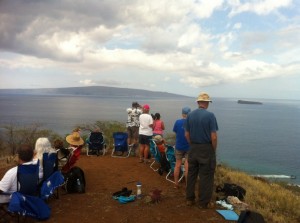 A total of 1,054 humpback whale sightings were reported during the 2012 Great Whale Count on Maui this weekend.

The largest number of sightings was at Pu’u Olai were 232 whales were counted, (33 of them claves); followed by Papawai Point (the scenic lookout on the Honoapiilani Highway) with 189 whales; and Ma’alaea with 167 whales.

“There is potential for variability from year to year, “ said Daniela Maldini, PhD, Research Director at Pacific Whale Foundation in a media statement.

Maldini said her suspicion is that the season is late this year.  “We are only starting to see competition pods during the past few weeks and the calves we’re seeing are quite small,” said Maldini. 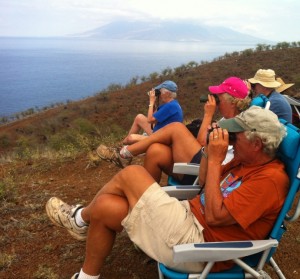 Pacific Whale Foundation President and Founder Greg Kaufman agreed saying, “At Pu’u Olai, we observed a number of larger, more active groups of whales outside our three nautical mile observation area, giving credence to the notion that the season is still moving towards a peak of animals.”

From the observation area, Kaufman said the late arrival theory was supported by 90% of whales off of Pu’u Olai seen moving from the south into Ma’alaea Bay.

“We know that the peak of the season, when the maximum number of reproductively active females, males, subadults and calves appear off Maui , can shift several weeks each year,” said Kaufman.  He said factors affecting the season peak arrival time may be determined by prey availability in the Alaskan feeding grounds, water temperatures and other environmental, biological and behavioral factors.

More than 100 volunteers and researchers participated in this years’ count, held on Saturday, February 25, 2012, at 12 shoreline lookout points across Maui’s south and western shores from Makena to Kapalua, and also at Hookipa Beach Park on Maui’s north shore.

The annual count is organized by Pacific Whale Foundation, and is used to supplement results from agency’s field studies. The count, officials say, provides a long-term snapshot view of whales and a valuable look at Hawaii’s winter whale population. 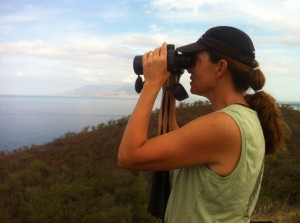 Although fluctuations have occurred from year to year, the general trend has indicated an increase in whale sightings, according to Kaufman.

The whales come to Maui to mate, give birth and care for their young, with large numbers of whales known to frequent the coast of Maui, in the area bordered by Maui, Kaho’olawe, Moloka’i and Lana’i. 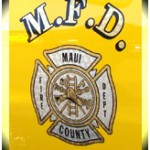