Scientists from the University of Hawai’i at Mānoa’s School of Ocean and Earth Science and Technology announced the discovery of land-ocean connections off of Molokai.

The organic matter supports invertebrates, tiny crustaceans, and mollusks; which in turn serve as food for many fish species, according to Fabio De Leo, lead author and PhD candidate at the UH Mānoa Department of Oceanography.

Further studies are planned at six other submarine canyons around the state to further understand factors that lead to an increase in the number and diversity of marine animals.

The canyons, located less than a few miles from shore, serve as a collection bed for land based plant material, including decomposing tree trunks and tons of kukui nuts.

They found that this “canyon effect” of enhancing fish abundances is obliterated at intermediate depths of around 650 meters.  Scientists say this coincides exactly with the core of an oxygen minimum zone (where oxygen concentrations are depleted) that flows around the Hawaiian archipelago around those depths.

The research was supported by NOAA Ocean Exploration and by the Hawai‘i Undersea Research Laboratory. 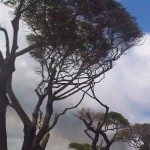 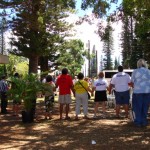