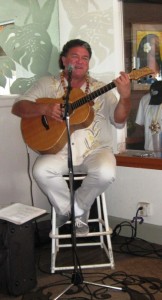 The recent construction has made access to Maalaea Harbor difficult. But now the job’s almost done and there’s plenty of good news down by the water.

Not the least of the improvements is the new “Kanikapila Thursday” at Buzz’s Wharf. The classic harbor front eatery has been a Maui tradition for more than 40 years. It’s still a family-run restaurant, with Marla Braun-Miller, a grand-daughter of the founders at the helm as general manager.

While the outside at Buzz’s never changes, the inside recently received a low key, yet stylish, make over.  To show off the improvements Braun-Miller said she worked with staffers Fran Lew (Catering & Events Manager)  and Emily Koenig (Marketing Manager) to bring back traditional live Hawaiian music once a week. The three women put their heads together and out came the traditional music that was once a Maui staple. Together it’s “Girls Rule” team, friendly, but decidedly motivated to build and expand on Buzz’s loyal customer base. 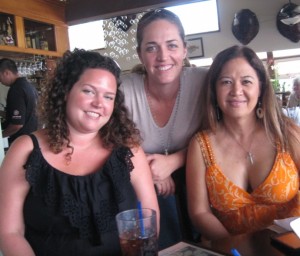 One of the best parts of the new interior is the bar and lounge area, furnished with comfortable couches arranged in a semi-circle around the music stand. There are still regular tables, as well as seats at the upgraded bar.

In tune with the new look is a new music line-up which features a different entertainer performing live Hawaiian music every Thursday from 3:00-6:30 p.m.

Gene and Elaine Glenn visiting Maui from Owensboro, Kentucky snuggled into the cushions and enjoyed the music of Tarvin Makia. The singer-guitarist was first in Buzz’s schedule of entertainers. His mellow traditional acoustic styling got a nice round of applause as the lounge filled up. He will be followed by a different musician every Thursday pau hana through May.

Buzz’s has also updated their pupu menu. On “Kanikapila Thursdays” they now offer a 30% discount on selected items. The management treated Maui Now to a Pupu Sampler featuring Poisson Cru (a Tahitian style Poke in lime and coconut), Shrimp Poke, Calamari Fingers and Beer Batter Onion Rings. The nicely arranged plate came with both mild and spicy dipping sauces; $19 all up.

Though this item was not on the discounted list, it was sufficiently appealing that at least one other patron took notice and ordered the same thing. The assorted munchies were tasty and provided enough finger food for two. Thursdays on the beverage side domestic bottles are $3, wells $4 and margaritas (rocks) are $5.

Despite the ongoing construction at the harbor, business at Buzz’s is good. But, Braun-Miller pointed out, “No matter how bad business is at other times, February is always good. When it’s cold on the mainland the desire to escape is natural.” 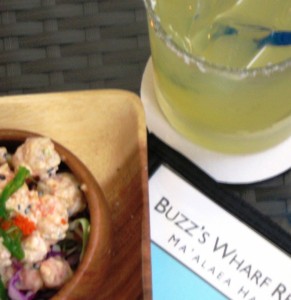 Check the website for future performers and special events. 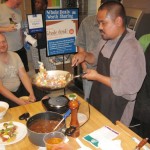