King Kekaulike’s Bloch Battles From Behind to Win State Title 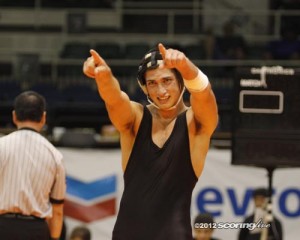 Every state champion has a story to tell. However, none will be as good as the one King Kekaulike wrestler Austin Bloch is telling today.

The 140-pound senior rallied from a 4-1 deficit against Kamehmeha Kapalama’s Tyson Kuahine to claim the only gold medal from the Maui Interscholastic League at the Chevron/HHSAA Wrestling Championships.

Bloch’s dramatic victory at the Neal Blaisdell Center was arguably the “match of the meet” as few wrestlers experience triumph trailing by three points with 90 seconds left in the bout. Not to mention his feat came on the biggest stage for prep wrestling in Hawaii.

“To tell you the truth, I only expected him to tie the match . . . and that’s what we were shooting for,” Kekaulike coach Grant Nakamura said Sunday, recalling the Saturday night match and the margin Bloch would have to overcome going into the third and final period.

Although Nakamura had prepared Bloch to battle from behind and never give up, the former state champion (Baldwin, 2001) and Iowa State All-American, knew it would require phenomenal effort in the third period to force extra time, much less win.

“Then with about 1:30 left in the match he had an escape that made it 4-2. But he was still down by two,” Nakamura recounted. “With 30 seconds left he gets a takedown.”

The takedown gave Bloch two points, tying the match at 4-4. “Then he (Kuahine) tried to roll out of it (for an escape) with about five seconds left in the match and when he did Austin caught him and got a quick two count, almost pinned him.”

Bloch’s final offensive move proved to be the difference — near fall worth two points — coming right as time expired.

“It was amazing, I couldn’t believe it,” the coach said after he looked to the officials table and saw the final score: 6-4.

A shocked Nakamura turned to his second-seeded wrestler, who finished third last year, and pointed to the score.

“The look on his face was priceless. He had no idea. I pointed to clock and when he saw he won he broke down and celebrated.”

Nakamura added: “It was definitely the most exciting match.”

With the win, Bloch becomes the fourth state champion wrestler from the Upcountry school. Last year Jonathan Pico won at 162 pounds. Landon Kebow won the 171 title in 2007 and Mike Wheeler claimed the 160 weight class in 2003. 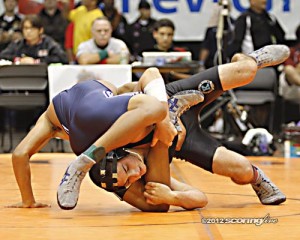 Bloch was the only MIL wrestler to win a gold medal from the five who advanced to the finals in their respective weight classes. Molokai’s Mikayla Pico, the lone top seed from the MIL, finished second in the girls 98-pound division. Pico was hampered by a shoulder injury.

Punahou ran away with its sixth straight boys title, scoring 223 points compared to 132 by runner-up Mililani. Kamehameha-Kapalama and Lahainaluna were tied for third with 126 1/2 and Campbell fifth with 80.

In the end, Nakamura was proud of what Bloch accomplished.

“He always has a good attitude and is a hard worker. He’s also a leader and makes sure everyone is in line. He also trains during the offseason, doing Freestyle wrestling. I see him doing good things.”

Bloch, who has already been accepted to Arizona State, finished his senior season 36-1.

“It was a good night,” Nakamura concluded. Certainly memorable and worth retelling. 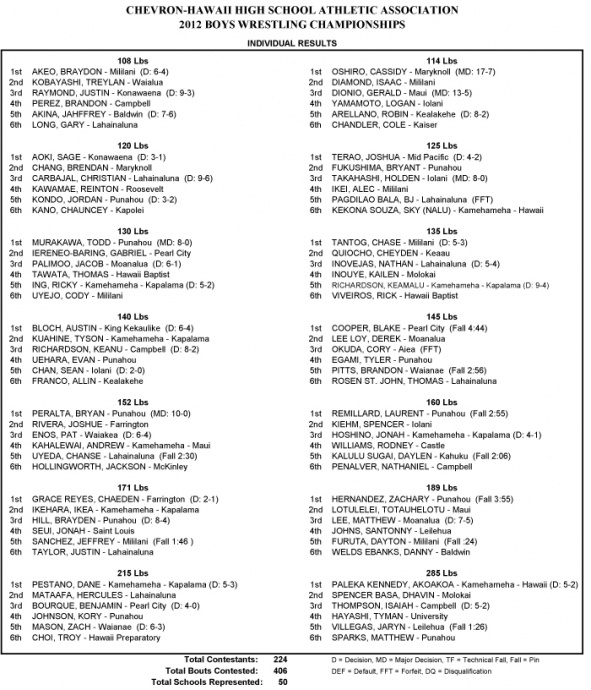 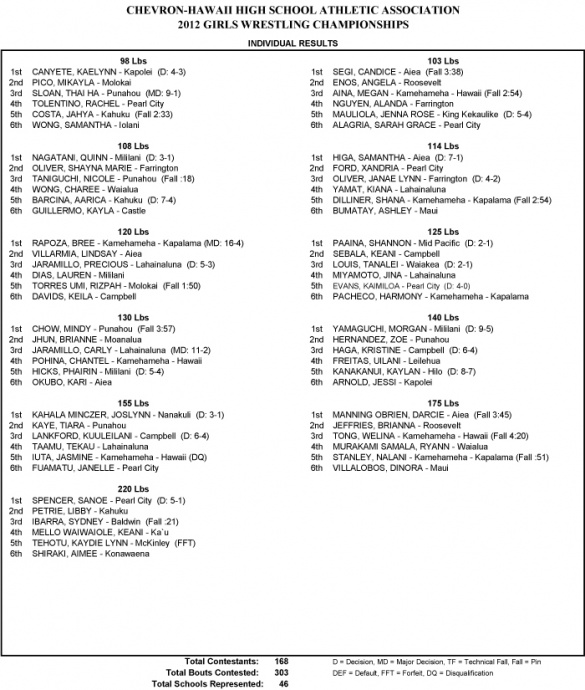 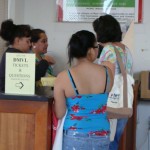