An early morning fire caused an estimated $100,000 in damage to a small structure under construction in Haiku.

The 1,000 square-foot, two-story unfinished building was not occupied.  No injuries were reported, and no one was displaced. 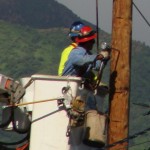