A proposal to set a 10 p.m. ban on entertainment, music and dancing at the Kihei Kalama Village was voted down today, but could resurface again in six months if noise complaints persist.

“We will give the licensee enough time to control this issue.  I don’t know if they agree with it, but that’s my recommendation,” said Robert Tanaka, Commission Chair before a standing-room only crowd in the cramped quarters of the Liquor Control Conference room in Wailuku.

The meeting on a proposed 10 p.m. ban on entertainment at Kihei Kalama Villages drew dozens of people who crowded the courtyard of the Trask Building prior to testimony on Wednesday. Photo by Wendy Osher.

During the six month period, the Liquor Department will monitor noise levels, with plans to reintroduce the proposed ban if bona fide violations are documented.

Commission members suggested that licensees come up with standards to keep each other in compliance during the trial period and moving forward.

“You have some licensees that already abide by this condition; and we hate to have them be penalized because of some other licensee,” said Tanaka.

Chair Tanaka suggested that the owners consider installing sound proofing materials, confine the music within the establishment, keep the door closed during music and entertainment, and refrain from having music outside on the deck unless the entire deck is enclosed.

The proposal was born out of ongoing noise complaints from nearby residents dating back to 2007.

Two Maui Police officers were the first to testify saying they would support the commission on whatever decision they made.

Two officers from the Maui Police Department offered testimony at the meeting. Photo by Wendy Osher.

“We’ve gotten noise complaints for years said,” said Officer Alan Brown, “With the noise at the bars, the police do not have the authority to shut them down; we have to refer those complaints back to the LC (liquor commission) enforcement section.  Over time, people quit calling us because we keep referring them to your organization to deal with it,” he said.

Maui Police Sgt. William Hankins, who worked the area for 10-15 years said, “If you live on Kihei Kalama Street, or Keala Street, and your neighbor has a large party with a live band, we have the option to go down there and shut that down–the police can enforce that; (but) 50 feet to the other side of that person whose making a formal complaint, if there’s a liquor license that has a loud noise, there’s nothing that we can do at this point.”

“We hear it from the community of all the complaints in and around Kihei Kalama Village and the Island Surf Building. We respond to their complaints; although over the recent history, the complaints have dropped off–and we do feel it’s because the public feels that there is a lack of action,” said Officer Brown.

Brown noted that there were also issues from LC enforcement in trying to pinpoint who the responsible bar is, “especially when you have 10 different bars in this one small area,” he said.

As far as liquor licenses go, Sgt. Hankins said, “We have our hands tied.”

Seven residents of the area signed up to testify in support of the ban including Linda Kime who lives at the nearby Island Surf building.

“When the music is so loud in my house that I can’t hear my TV or talk on the phone, it does affect the quality of my sleep; and the quality of my sleep allows me to work the next day. When I hear people in my building say ‘I came to this island to enjoy the island, but I can’t sleep, I’m never coming back here again–I’ll go to the Caribbean, but I won’t come to Hawaii again,’ this concerns me,” said Kime.

Fellow Island Surf resident, Donna Schleich, who has lived at the location since 1973 said, “We have even changed our windows so the noise wouldn’t come through, but it still does.”

“At 3 a.m., we’re wide awake,” said Schleich, who said it’s not just the music and entertainment that keeps her up, but drunken patrons who have loud conversations, arguments and fights in the area.

“We want the bars to stay in business; and we want to sleep at night,” said Halama Street resident, Lemoine Radford.

Lemoine Radford was among those who testified. Photo by Wendy Osher.

Radford said that without any sound barriers, the noise shoots straight across the park to her house.  “There are times when I hear three different music pieces going at the same time.  It seems to rev up at 10 p.m.; then it goes up and down; and then around 1 a.m., there’ll be the noise of people screaming or yelling leaving the bars, reaching their cars,” she said.

Radford suggested that the establishments close doors and windows to contain the sound within buildings, have businesses empty glass bottles during the daylight hours, and have increase security in the area.

“We’re just trying to think of ways to try to get the customers to be respectful so that we can sleep through the night, and the bars can be successful in staying open and in business,” said Radford.

Opponents: “Quite Simply, This Rule Would Put Me Out of Business in About a Week.”–Owner of Ambrosia

The proposed rule change prompted an online petition that had garnered the signatures of more than 1,400 people who have expressed opposition to the measure.

The petition claims the proposed ban would “cost hundreds of people their jobs, have a devastating impact on Kihei’s economy, and put several local bars and restaurants out of business.”

Michael Patrick Ryan, owner of The Dog & Duck and neighborhood resident, said facetiously, “my noise complaint is that the freeway runs 2 a.m.–it runs all night; so if we could shut down the motorway, I’ll be happy too.”

On a more serious note, Ryan said, “we’ve got to sit at a table and talk here.  We’re not mind-readers; and for somebody to come into our business and say ‘you’re going to earn half as much money as you did last year because we don’t want to listen to music after 10 p.m.’ is ridiculous.”

“There’s ways of working this out by speaking to the people… but having a kangaroo court, just doesn’t work,” said Ryan.

Jerome Metcalfe, past owner and licensee said, “It completely violates these individuals that have put their life savings into this business, and the income and the employees that will suffer from this.”

“You don’t have the authority, and I don’t know who thought that you guys got it, but you don’t have it,” said Metcalfe.

“Once it goes to public referendum, and it is a law of ordinance, you can dig in and regulate all you want,” he said.

Howard Grunes, owner of Howie’s Life’s a Beach, purchased the property for his bar and restaurant about four years ago.

“The reason I decided to buy that location is because of its ideal situation for a music venue,” said Grunes.

Grunes said he has not had a single noise complaint from anyone in the adjacent neighborhood, “partially because of our location,” which is at the far northwest corner of the property with all doors pointing out to the ocean.

Noise containment measures have also been taken in terms of sound curtains, keeping doors closed, and controlling the volume from the inside.

"Quite simply, implementing this rule, would put me out of busniess in about a week," said Candice Seti, owner Ambrosia. Photo by Wendy Osher.

“The proposed amendment would be somewhat of a collective punishment from a personal bar standpoint; but I also think its misguided in terms of thinking about the rights of business owners relative to the rights of residents in a neighborhood,” said Grunes.

Business owner Candice Seti of Ambrosia offered a similar sentiment saying her business was fairly unique at the Kihei Kalama Village. “Quite simply put, if this rule is put in place, the impact on my business would be irreparable.”

“For starters, I am the only licensee in Kihei Kalama Village that is not also a restaurant. We are a martini lounge; we are only open at night, and therefore, we depend on the later night crowd,” said Seti.

“We provide a venue where people come to dance, listen to music, enjoy higher-end cocktails; we also cater quite extensively to the service industry population on Maui, which is a group that doesn’t tend to get off work until 9 or 10 p.m.  As such, 85% of our business is done after 10 p.m.,” said Seti.

“Quite simply, implementing this rule, would put me out of business in about a week,” said Seti.

Ing continued saying, “we don’t like to see Kihei turning into downtown Chicago–that’s going to lose the essence of what we love about this place; but this rule is not the way to do it.”

David Jorgensen, was also among those who testified against the proposed revision saying, “As drafted, I believe the rule is unreasonable and unworkable.”

“The new language states that all music, dancing, and entertainment shall cease at 10 p.m.,” said Jorgensen.

“It doesn’t take long to come up with a lot of examples of things you wouldn’t be able to do–you couldn’t have an acoustic guitar player, you couldn’t have a transistor radio turned down to a very low volume, you couldn’t sit in a bar and watch ESPN, watch a basketball game–that’s all entertainment.

“I’m very hopeful you’ll take the opportunity to review all of the suggestions and chose an option that will satisfy both the surrounding community members, without leaving over 100 people unemployed,” said Seti.

“The current option of simply ceasing all entertainment at 10 p.m. may possibly appease a small handful of individuals; however, it will devastate the lives of hundreds of others. Other options are available and need to be explored and implemented,” said Seti. 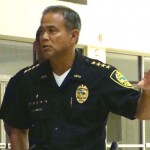