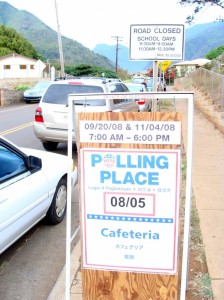 Sixteen people on Maui have already pulled papers as they consider a run for public office in the upcoming 2012 election.

In the state Senate, Republican Chayne Marten pulled papers last week for the District 6 seat (previously Dist.5, but the numbers changed because of reapportionment), currently held by Sen. Roz Baker.

In the state House, Kihei resident, Joe Bertram III pulled papers for his old seat after being narrowly defeated by Republican George Fontaine in 2010.  At the time, Fontaine earned 48.9% of the vote, ahead of Bertram’s 46.1%.  Also pulling papers for the seat this time around is Kihei resident, and Chief Professional Officer of the Boys & Girls Clubs of Maui, Colin Hanlon.

In the Council, the Kahului seat has already drawn the attention of three individuals including Alan Fukuyama and Don Guzman who both filed papers in February; as well as Erin McLaughlin who pulled papers on March 7.

For the Wailuku/Waihee/Waikapu Council seat, incumbent Michael Victorino and Joseph Blackburn II both pulled papers on the same day in February.

A single nomination also surfaced on Molokai where Stephanie “Stacy” Crivello pulled papers for the seat being vacated by the term limit of Council Chair Danny Mateo.