He will be joined by his wife, Audrey, and supporters at the State Office of Elections in Pearl City.

In a phone interview this morning, Case said he is undertaking the candidacy, “essentially because we need strong, effective leadership in Washington that’s honest with us, preserves our values, breaks through the incredible gridlock in Washington today, and just gets the job done.”

“That’s what we need today in our country and in Hawai’i is nothing more or less than leadership,” said Case.

Case called Washington “dysfunctional,” saying he wants to go there on behalf of Hawaii to get it fixed to move forward.

In a written statement Case said, “The reality is that we can’t achieve what we must without changing DC.  Only then can we find workable, inclusive solutions to grow our economy, balance our budget, assure our energy needs and save Social Security and Medicare, to touch just the tip of the iceberg.”

When asked what his priorities for his campaign would be as he files for official candidacy, Case said, “The clear priority that I have is growing our economy.”

“We have to balance our federal budget because that is crippling our economy and putting ourselves in incredible debt not just today, but over the next generation,” said Case.

In terms of Maui related items of interest, Case spoke of his experience representing Maui in congress for four years, beginning in 2002.

“I have a whole generation of my family that actually lived and worked on Maui for several decades; so I know Maui well.  I held talk stories all over Maui and did my very best for Maui as a congressman.  So you have something to judge me on,” said Case.

He said issues that he talked about for the country are just as relevant for Maui.  “As we grow our economy; as we help tourism; as we help agriculture; as we work on enhancing our technology industries nationally, we want to focus that to Maui as well–because those are the pillars of Maui’s economy, and we need to make sure that they war always enhanced.”

“Areas that I think are particularly valuable for Maui in the future economically, are to grow education as an export industry,” said Case.  “We want to educate our Maui folks right at home, but we can also use that as an economic driver for Maui.”

“I want people to see me up close and personal and be able to ask me their questions–that’s why I also want to ask my opponent, Mazie Hirono, to debate me, so that the people on Maui can size us up side-by-side and make your own decision.”

Other than Case and Rep. Hirono, the list of potential contenders who pulled papers include: Heath Beasley (N) of Ewa Beach, Charles Collins (R) of Hilo,Michael Gillespie (D) of Honolulu, Antonio Gimbernat (D) of Kihei who filed on February 7, Edward Pirkowski (R) of Honolulu, and Arturo Reyes (D) of Waipahu.

Another high profile name that has also surfaced is former Governor Linda Lingle, who expressed an intent to run.

Case was born and raised in Hilo, and is the fourth generation of his family in Hawai’i. He is married to the former Audrey Nakamura, and has four children, all in their 20s.

Case practiced law in Honolulu for most of the past thirty years, served eight years as a Hawai’i State Representative, and over four years as a US Congressman. 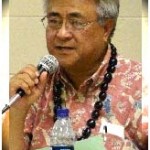