On May 4, Maui Mayor Alan M. Arakawa toured the headquarters of Noni Biotech International LLC and invited the company to join a County of Maui business trip in August to Japan and Korea.

Their achievements have not gone without recognition. In 2011 the company received the prestigious Presidential “E” Export Award for excellence in exporting. In addition, Noni Biotech was selected as a finalist in the APEC Statewide Business Innovation Showcase in September 2011. Mayor Arakawa presented the award during the ceremony hosted at the Sister Cities summit in Waikiki.

After the morning tour, visitors gathered in the company conference room for a light breakfast and a presentation from Noni Biotech’s Presidents Marie-Laure Ankaoua and David Backstrom.

Ankaoua and Backstrom shared more information about the company’s background and their plans for future development in Maui as well as in their farm and factory, both of which are located on the island of Hawaii.

“We feel very honored that Mayor Arakawa took the time to come and visit us. It shows how much he is paying attention to the growth of small businesses in his county,” said Ankaoua, in a written statement. 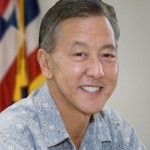