County crews said the break resulted when a passing motorist struck a fire hydrant in the Maui Lani subdivision at around 5:30 p.m. on Thursday, June 14, 2012.

The crash blew a regulator, which sent high pressure water through the system and overwhelmed the aging pipes beneath the gym sometime prior to 11:30 p.m., county officials said.

The water then burst through the floor in one of the gym offices. County workers at the scene said there was enough water flooding hallways and offices to fill an Olympic-sized pool.

Preliminary damage was estimated at around $200,000, but did not include estimates for water damaged equipment. The water did not flood the gymnasium itself and the gym’s basketball court remained untouched.

The burst waterline forced the shut down of water service for the entire War Memorial Sports Complex, including the gym, the football stadium and the soccer and Little League fields.

About 18 county employees who work in the gym offices daily were relocated.

Earlier this year Mayor Alan Arakawa had asked the County Council for the funds to design a new gymnasium/civic center because of rising maintenance costs of the 50 year old facility. 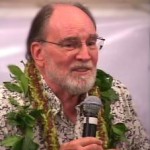