Governor Neil Abercrombie today signed a bill into law that is designed to prevent the spread of axis deer in the islands.

Under Senate Bill 3001, the intentional possession, and inter-island transportation or release of wild or feral deer is prohibited.

Axis deer are being blamed for significant damage to native habitats and agricultural crops on Maui. They also pose a danger to vehicle traffic on roadways.

The new law comes as crews work to eradicate the deer population in Hawai‘i County, before ranchers and farmers face the same problems now occurring on Maui.

Senator Gilbert Kahele (District 2- Ka‘u, Puna, Hilo), who introduced the measure, released a statement today saying, “It is imperative that Hawaii’s environment and local industry be protected from the devastating effects that non-native species can pose to the health of our local economy and ecosystem.”

The Hawaii Director of The Humane Society of the US, Inga Gibson, commended Sen. Kahele for the introduction of the measure saying, “Such illegal introductions cause unnecessary animal suffering and harm to the environment.” 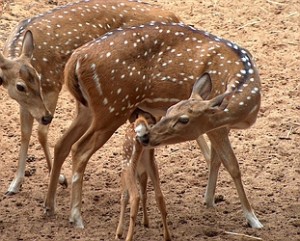 A reward of up to $2,500 is being offered for information leading to the arrest and conviction of the person(s) responsible for the illegal transport, release, or abandonment of deer on the Big Island.

The DLNR- Division of Conservation and Resource Enforcement is also asking anyone with information on this illegal activity to contact their toll-free reward tipline at 1-855-DLNR-TIP (1-855-356-7847).

If anyone sights a deer on Hawai‘i Island, they are asked to call the Big Island Invasive Species Council Deer Coordinator at (808)443-4036.