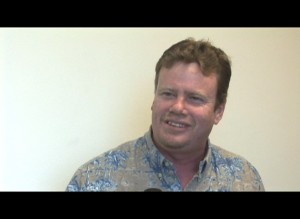 Aloha, I’m Angus McKelvey and I’m humbly running for re-election for the State House District 10, which is West Maui, Ma’alaea, and a small portion of North Kihei.

I’ve been honored and humbled to be your state representative for the last six years–and through the toughest economic recession in history, we’ve managed to continue to get the resources the community vitally needs; as well as to turn things around both in the short and long term.

Infrastructure is critical for all of us on the west side. Not only have we been successful in securing the funding that we need for the projects to keep our infrastructure going; but have also been able to use our seniority and our relationships to get government to execute–including a state of emergency, which has been so long overdue in keeping these things open despite the onslaught of both the environment and erosion…

I’ve also served as the chair of Economic Development–and through that time, we’ve done the Hawai’i Innovation Economy Initiative to develop the green, clean jobs that we so desperately need here in Maui as well as the rest of Hawai’i.

Through aerospace, broadband, tech, film and digital media, as well as what I’ve called Act 2.0–we can cross stimulate these sectors; and through our world class university system and strategic positioning, be leaders in the innovation economy both for the Pacific as well as the entire world.

Once again, it has been my pleasure to represent you, and I humbly ask for your support again on August 11. Mahalo.

Question 1: What is your number one priority for the West Maui Community in this upcoming term and how do you plan to implement action to accomplish this goal.

Over the last six years, we’ve been able to secure the resources necessary to get these projects going, and to keep them going, despite cuts going all over state government; as well as to get state government to be more responsive with measures like state of emergencies, and other types of tools to implement–not only for our existing facilities, but for needs that have cropped up like the tragedy of the gentleman at Canoe Beach because of lack of buoys.

Those are the pressing needs, and always have been the pressing needs. We also have to continue with the Lahaina bypass so that we have that commercial artery road, and can turn the south side that’s falling into the ocean–which we’re trying to protect the scenic highway–which will then give the county the ability to preserve all of that land in-between the beltway, and hopefully, from Kai Hele Ku Street to the dump; but hopefully, all the way from Puamana to the dump–which would make it the largest open green space in the entire State of Hawai’i.

Infrastructure also means our harbors. The 3-11 tsunami, besides damaging our roads, also clogged the channel of Lahaina Harbor and nearly caused it to be designated to be shut down.

We were able to get emergency dredging done by securing funds in cooperation with both the federal government and the state government.

We are now in the process of getting ready to dredge Mala Wharf–thanks to the cooperation we’ve received while the dredger is still there–at a cost of $200,000–which saves our taxpayers $500,000.

So, infrastructure is and has always been job number one.

Question 2: Do you believe in tax credits for the establishment of a film industry on Maui, and to what extent can the state legislature help to facilitate that goal. Are there other options/opportunities for economic diversification that you can expound upon?

I’m a strong supporter of the film and the digital tax industry. It was part of our Hawai’i Innovation Economy Initiative this last session. It’s one of the several industries that ties into broadband, aerospace, and other industries that are being leveraged. It helps our two core industries–which is especially the visitor industry being one of them.

The trick and challenge has always been to create a responsible credit program so that we don’t end up curtailing other needed services and programs at the expense of the credit.

We also have to make sure that we’re building a robust industry here, and not just a tax credit–which, if it is curtailed, at some point in the future, means the industry flees–which is what happened in states like Michigan, which invested millions and millions in infrastructure, and are now left with empty studios because the credit was reduced and they did not have the necessary workforce.

We had several proposals last session to increase the credits; and I’m confident that with all parties coming to the table, and being flexible, that we can find a way to enhance our credit program–especially for the neighbor islands, which we work on long-term development in workforce and infrastructure–which are critical for the birth and growth of a real film and digital media industry here in the State of Hawai’i.

Again, we have to be responsible. We cant’ be burned. Tax credits are easily abused and we saw with Act 221 that it could be a drain on the treasury with little or no return; however, by being pragmatic, and looking at our growth as a state, and the economic recover as well as our other programs and services, and our unfunded liabilities, we can generate extra activity for this industry, as well as implement long-term solutions.

We did pass one measure last year for the economic matrix–the innovation economy–to start venture accelerators for the film industry. So, we’re hopeful with that and other initiatives next session (that) we can actually get these credits going again.

Question 3: There has been more than one death in Maui County waters involving nearshore boats with swimmers or divers. What is the Legislature doing to address the conflicting use of nearshore waters and ensure the safety of all involved?

The tragedy that you talk of was a real blow to the community—and there have been others as you have said.

One of the key things we did this last Legislative session is we put in two measures—one measure, which was a house bill I introduced, puts together an ocean recreation management advisory committee consisting of a representative of all users of the area to work with DLNR to look at the rules and regs of the ORMA, as well as conflicting uses.

What has been exposed by these terrible tragedies has been the fact that the rules and regs of the ocean recreation management area in Ka’anapali are highly vague, conflicting, and are layer upon layer of rules developed in a vacuums.

As a result, there’s very few education, misunderstood uses, and even enforcement officers are at a loss sometimes to sort out the right of the road, and how to get people to get along in that area—which has become more and more busy and congestive.

What we’ve also done in the short-term is we immediately went to the governor, and through his help, we installed swim buoys to replace the ones that were lost, that caused the tragedy in Ka’anapali, that was supposed to be replaced three years ago.

A boat came by and brushed against one of them, cut the rope cable, and the director of the DLNR who installed the buoys himself personally there, called over to ‘Oahu and got cabling sent over to Maui and replaced all of the tethers with cabling to ensure that the buoys would not be cut off again.

But the incident shows the need to educate users and to establish clear and consistent rules; and the ORMA will allow for DLNR to establish rules with community input—and not with that in a vacuum.

Aloha, I’m Angus McKelvey, and I’m humbly asking for your support for re-election for the House 10th District—West Maui, Ma’alaea, and North Kihei. I’ve been fighting for you at the state level for infrastructure, for a better economy, and for a more responsive state government.

Although times have been tough and we face challenges that aren’t of our making, we’ve managed to get the resources we need to keep our infrastructure open and to turn the economy around and to keep the vibrant seat of Lahaina and all of Maui going.

We’ve taken big steps to develop the Hawai’i Innovation Economy to create clean, green jobs here in our state and in our island.

I humbly ask for your continued support and thank you again so much for allowing me to represent you, the people of Maui, at the state legislature for the last six years. Mahalo.