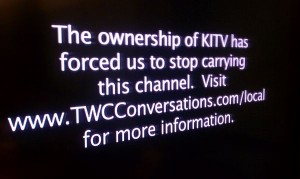 Time Warner has posted this message to explain why it is not on the air for Oceanic Time Warner Cable customers. Photo courtesy of Hawaii News Now.

Maui residents woke up to a black screen with white letters on KITV4 this morning which read, “The Ownership of KITV has forced us to stop carrying this channel.”

After failed contract negotiations, Honolulu television station KITV was blacked out from Oceanic Time Warner Cable Monday night at 11:59 p.m. due to a dispute between the ABC affiliate’s owner, Hearst Television Inc., and Time Warner Cable.

According to a statement on Time Warner Cable’s website, “on July 9, 2012, Hearst Television chose to black out their signals from Time Warner Cable customers rather than continue negotiations, and despite their chief executive officer saying just two weeks earlier that broadcaster blackouts are unfair to consumers.”

The statement goes on to say, “Time Warner Cable has reached hundreds of agreements with other broadcasters without broadcaster blackouts, but Hearst’s demand for a nearly 300% increase is way out of line. That kind of outrageous increase is unfair to our customers and unsustainable for our business. We believe broadcaster blackouts are wrong. Despite Hearst’s blackout, we stand ready to continue negotiations and are hopeful that the channel will be returned to the lineup shortly.”

Hearst said in its own statement today that “contrary to Time Warner’s claim, we have not “blacked out” our station. You may continue to receive the station for free, over the air, or by satellite from DIRECTV or DISH, and, where available, from other cable operators.”

“Time Warner Cable refuses to pay our station a reasonable fee relative to what it pays for other significantly less popular channels. Time Warner’s characterization of the percentage increase in carriage fees we are seeking is inaccurate. We have sought a reasonable increase consistent with the increased costs we have to pay for our highly valued programming and the carriage fees now paid to us by Time Warner’s competitors. The fees we are asking from Time Warner are based on the fees we are being paid by other cable companies under our recent deals, which is the real measure—not Time Warner’s exaggerated and distorted claims—of the fairness of our proposal. In fact, retransmission fees paid to stations are just 7 cents of every dollar of the total carriage fees paid to cable networks, which are less popular than local TV stations, according to recent independent research.”

At the time of this writing, Oceanic Time Warner Cable customers are still not able to receive KITV4. 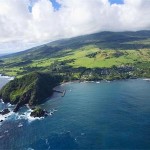 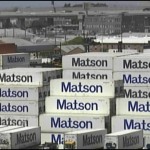