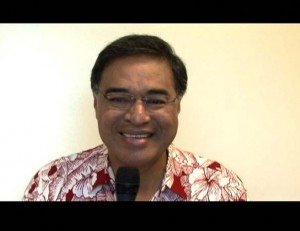 Interview and transcription by Wendy Osher

Aloha. Mufi Hannemann, candidate for the US Congress, 2nd Congressional District seat.  I want to go to Washington, DC to help you.  I want to help our middle class; I want to protect Social Security, Medicare, improve our educational system for our keiki; and obviously put people back to work.  The economy is the greatest challenge that we face right now.  So, please think of me on August 11–Mufi Hannemann, ready to go to work for you to bring the years of experience that I’ve worked in Washington, DC on your behalf.

Question 1: What is your number one priority for Hawaii in this upcoming term and how do you plan to implement action to accomplish this goal?

Question 2: Why should Maui constituents vote for you; and what direct impacts to you hope to make in Maui County if you are voted into office?

You know me in Maui County.  You’ve seen me through the years on Molokai, Lanai and Maui.  I have a tradition of public service,  but also in helping. I gave out a lot of scholarships through the years at the high school level for Maui students to go on to college.  I’ve gotten involved in the basketball aspect of taking female basketball players from Maui to the mainland; and when it comes to government, I’ve worked very closely with your mayors and county leaders.  I’m very fortunate and blessed to have the endorsement of the three most recent mayors of Maui, and many of your government leaders–you see, they trust me.  They know that I will truly work hard to make Maui No Ka Oi–and that is the difference–if you’re going to represent Maui in the Second Congressional District, you can’t just show up in an election year and say here I am.  They need to know that you’ve been with them through the years, and that you will be with them going forward.

Question 3: What concrete examples can you give of your experience that makes you more qualified that other candidates included on the primary ballot?

There-in lies the difference between our candidacy and the candidacy of others.  We bring to you a record of results. It’s not about making a record amount of promises.  It’s about getting the job done in the past so that people know that they have great confidence in you that you can do it in the future. We’ve been able to secure APEC for Honolulu, awarded by this administration to the city of Honolulu; we’ve gotten major infrastructure funding for many of our projects in Honolulu including transportation. We were able to help save Pearl Harbor from closing. We have also of late worked very, very hard to keep tourism strong so that we can have more opportunities for tourists to come from Asia. It’s a proven track record of results. I’ve worked for four presidential administrations–two Democrats, two Republicans.  Washington is a who-you-know kind of town.  It’s based on relationships; it’s based on the fact that they’re very familiar with me. I can literally hit the ground running from day one with the experiences that I bring to the table. I’m anxious to go to Washington, DC to make Maui No Ka Oi.

This is Mufi Hannemann, candidate for the Second Congressional District seat for the state of Hawai’i, reminding you that the primary election is on Saturday, August 11th–five weeks earlier than when you’re used to voting. It’s important that you make an informed choice about my race, and the races that are before you.  This is a democracy that we live in, so if you want to learn more about our campaign, please go to mufihannemann.com and see where we stand on the issues–issues that are so important to you. Whether it’s the economy, education, the environment, or the overall quality of life, we stand ready to share our thoughts with you and also to hear from you about what’s on your mind and what you would like your next congressman to do for the state of Hawai’i.  Mahalo.  Aloha. 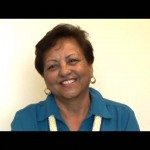 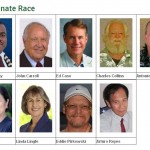