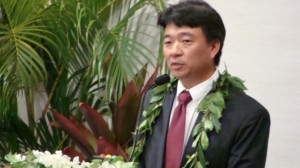 Lieutenant Governor Shan Tsutsui was on his home island of Maui where he provided remarks at the 2013 inauguration of the Maui County Council on Wednesday, Jan. 2.

The event was one of his first official speaking engagements since being selected as lieutenant governor last week. He also spoke at the Maui memorial services for the late US Senator Daniel Inouye over the weekend.

In his address before the newly sworn in council, Lt. Gov. Tsutsui said that when he decided to accept the move from Senate president to the lt. governor’s office, he asked himself why he is in public service.

“When I asked myself why it is that I do what I do, I think the answer is the same answer you’d probably hear from the nine members sitting here this morning–and that is that we want to serve the community in the best way possible. We don’t look at it from what’s good for us or the community tomorrow, or what’s good for us or the community two years from now, or in four or six years–but really what we can do today to make things better for the residents of our county,” said Lt. Gov. Tsutsui.

Tsutsui said his decision to accept was somewhat bittersweet, and still is today.

“It’s sad that I’m not going to be able to continue to represent just the people of Central Maui who I’ve become very fond of and who I enjoy being an advocate for a number of years for them; sad to leave my Maui colleagues who I’ve really enjoyed working with and have been nothing but supportive of each other,” he said.

“I think it was that teamwork, and the fact that we all worked together very well, that made the decision very tough. Of course there are a number of policy issues and projects that are still left on the table that we have begun, and I believe will be completed. I hope with my new position that I can help and support my colleagues in the Legislature as well as here on the council in moving some of those things forward,” said Tsutsui.

Tsutsui said the decision was also tough because he knew that the opportunity to become the lieutenant governor was due in a large part to a chain reaction and the unfortunate passing of Hawaii’s senior senator Daniel K. Inouye.

“Over the past couple of days, as I’ve had some time to just sit back and reflect, I just think about the tremendous opportunity that is out there before us–an opportunity to really step up to the plate and try to make a difference. I think that opportunity is no different than what our current council will have before them,” he said.

In his address to the newly sworn-in council, Tsutsui spoke well of the members and the mayor for their action-minded approach.

“Today, I believe that this new council, led by Council Chair Baisa, is not only capable but very prepared to make those tough decisions that will have a lasting impact on all of our lives. I’m sure that these nine council members are ready and have plans to tackle the many different issues before them; and like with our own personal lives, we know at times there will be those unexpected issues and opportunities, and challenges that will ultimately define this body and the members as individuals.” 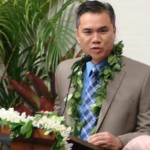 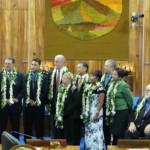