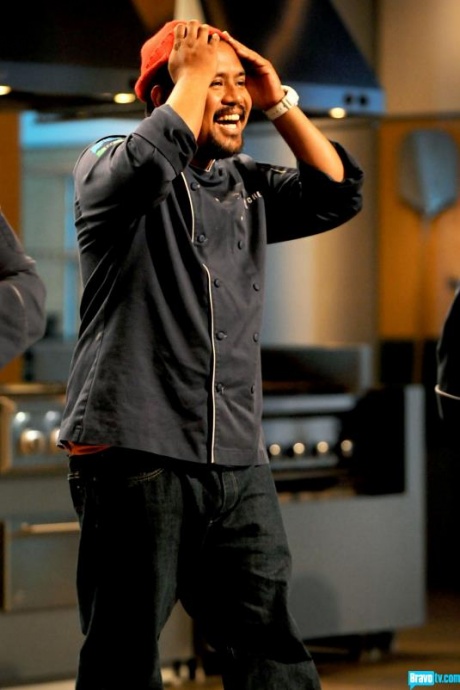 Maui Chef Sheldon Simeon of Star Noodle in Lahaina continues to shine on Bravo’s Top Chef, not just for his culinary prowess, but for his undeniable and seemingly unflappable sweetness and charm.

The season started on Nov. 7 with 24 hopeful “cheftestants” and is now down to just six chefs left competing.

Chef Simeon has held his own, even winning the difficult and oft-dreaded “Restaurant Wars” last week with his Filipino-themed offering, Urbano.

We caught up with him to ask some questions about the show thus far.

Maui Now: On the head to head berry challenge, you presented a dish of ahi summer rolls, ahi poke, fresh strawberries, and sweet chili sauce. Had you ever put fruit – let alone strawberries – into poke prior to this dish? Will we ever see this on one of your menus?

Chef Sheldon Simeon: I’ve never done this before. I thought the tartness of the strawberry would go great with the salty creaminess of the poke. I guess it turned out good because it was well received from the judges. We get some awesome strawberries that are grown in Kula so maybe when the season comes around you’ll see it on the menu.

MN: Not knowing what’s going to happen – and acknowledging you do – at this point (episode 11) is there someone you were rooting for if YOU don’t win?

SS: I wish everyone the best. It’s coming to the end and the competition is getting stiffer. Keep tuning in to Bravo and see!

MN: You made Beef Carpaccio with Poi Aioli, Mizuna and Mushroom Salad, and Silken Tofu Foam. Having spent many years vegan, I know Silken Tofu doesn’t actually taste like…anything. What were you thinking/going for there?

SS: It wasn’t my best showing! I ran into some problems with the slicing and plating of the carpaccio and got into a time crunch: we had to plate up 75 portions all by ourselves and I just ran out of time to work on the Silken Tofu. I basically put it in a squeeze bottle and dotted it on the plates.

MN: The same carpaccio received some harsh criticism from the judges. Do you get this feedback at the time or only when you’re watching the show now?

SS: Chefs are their own worst critics. We are cooking for some of the best chefs out there, and when you mess something up in a dish they are not gonna miss it.  It’s cool to see the judges’ first reaction when they taste your food. When the food is served we never get to see that; seeing their reaction is the best part I like about watching the show. 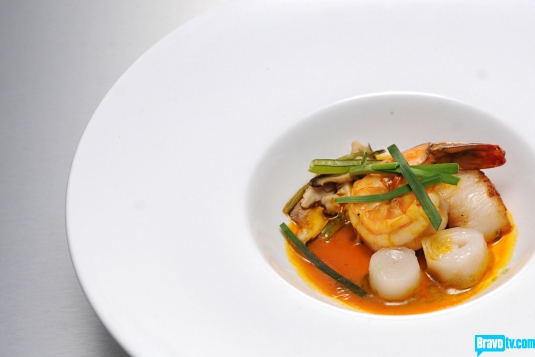 MN: Speaking of which, we know about the red hat you wear while competing. Do you have any traditions around watching the episodes as they air?

SS: No big traditions. I have it DVR’ed because I’m usually working when it airs.

MN: You won the Restaurant Wars episode! Woot! Your restaurant concept was “Urbano,” but it turned out Josh and Stefan had never cooked Filipino food before. Josh seemed notably stressed/concerned; even saying “I think it’s a risk. It could fail miserably.” Were you aware of their concern and did it affect you?

SS: It didn’t concern me. Josh and Stefan are professional chefs with a ton of experience. If I could guide them with the right flavor profiles I knew that they were more than capable of creating this and that they could execute.

MN: For a brief moment there, it appeared you’d lost your mind and were going to serve an actual balut. How does it feel to have introduced the greater US to the (kinda gross) concept of the balut and how did Josh’s interpretation compare in your opinion?

SS: It was Josh’s idea from the get go to do a modern interpretation of balut, and he pulled it off. It was such an honor to represent and showcase my Filipino heritage.

MN: Were you aware of how much tension was in the women’s kitchen?

SS: No, we had more than enough stuff to worry about in our own kitchen. We were FOCUSED!

MN: Stefan served the dishes, and the judges seemed to feel he treated them rudely. Did you know this while you were in back cooking? What did you think when you watched the episode and saw how he interacted with the judges?

SS: I give Stefan a bunch of credit for taking on FOH (Front of the House). Neither Josh or I were willing to do it. Stefan had a big task and he rocked it out. He got through and we all survived in the end.

MN: Again and again, Josie was on the chopping block but other people – Bart, Micah, Kristen – get the axe. Do you get the feeling that Josie is “good TV” and that’s helping her out a bit?

SS: That’s how the cookie crumbles. The judges have a difficult task, as they don’t see all that goes on in the kitchen. They make their decision solely based on the food and whatever they discover through questions at judges’ table. Josie’s very good at playing the game and that’s it.

With only four episodes to go, we will be talking to Chef Simeon each week until he wins the entire thing (or whatever happens. We think he’s going to win the entire thing and refuse to entertain any other possible outcomes).

Tune in and cheer him on when episode 12 airs tomorrow night at 10 p.m. on Bravo.

If there are relevant questions you would like asked of Chef Sheldon for our Episode 12 interview, please send them to Vanessa(@mauinow.com) by midnight on Thursday, Jan. 24 for inclusion. 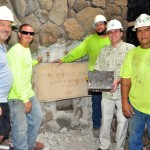 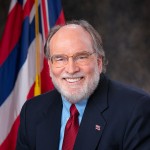