Rainy conditions accompany a big northwest swell, as surfers are prompted to think twice before paddling out in the murky waters. 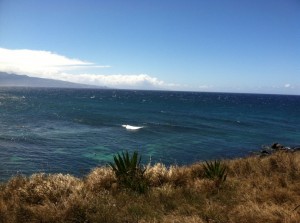 A rising swell can turn this… Photo: Carlos Rock.

A huge 10-18 ft+ NW swell is on the rise today (Monday 1/28)  that is slowly closing out most of the popular spots, leaving surfers wondering were else to surf that isn’t quite as exposed to the energy of the swell.

There are a few spots that come to mind.

But the recent run of Kona winds that brought in the storm system causing flash flood warnings across the island may have people thinking twice about trekking to the outer spots.

However, most people are welcoming the rain saying that Maui has been suffering from drought for the past few years. Days like today are more typical of winter in Hawaii. 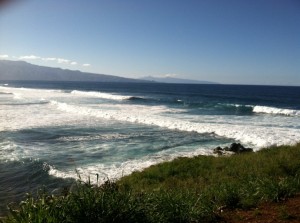 …to this in an hour. Ho’okipa. Photo:Carlos Rock

As long as there’s waves, surfers don’t really worry about the weather. They brave anything that comes their way with the thought of scoring perfect waves making the risk all worth it.

However, taking risks means getting in trouble sometimes, so be aware of the consequences. Namely, run-off from rivers that are causing murky waters from the heavy rains blanketing the islands. You may have heard the expert opinion that sharks tend to migrate to murky or brackish waters near river mouths and other areas that receive runoff.

Use your head and make smart decisions. If in doubt, don’t go out.

The forecast does call for smooth conditions as rain squalls block the wind and make glassy waves, so the choice is yours.

The most dangerous time to be surfing is during a rising swell because you can never really know when the waves will start getting bigger. You don’t want to find yourself stuck out in the lineup with 10-18ft+ bombs detonating on your head. That’s a recipe for disaster if there aren’t lifeguards present to aid you.

Just keep in mind how many times you say one more.

Be safe out there. 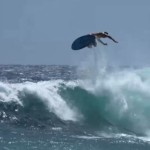 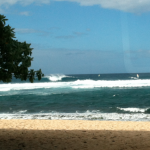