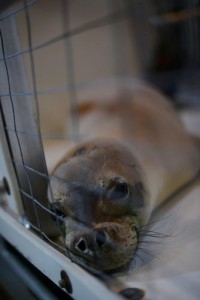 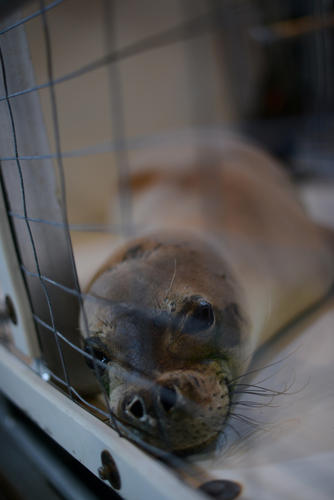 Coast Guard crews, working with the National Oceanic and Atmospheric Administration transport a Hawaiian monk seal from the Big Island to Oahu for urgent medical care, Feb. 1, 2013. The Hawaiian monk seal is one of the rarest marine mammals in the world. US Coast Guard photo by Petty Officer 2nd Class Eric J. Chandler.

The animal, identified by the tag K68, was observed exhibiting what appeared to be breathing difficulties, said Dr. Jeffrey Walters, Marine Mammal Branch Chief for the National Oceanic and Atmospheric Administration.

“A diagnosis was not possible in the field and it was necessary to bring the seal in to a care facility for a health assessment and treatment as needed,” said Dr. Walters.

NOAA officials say the seal was transferred to the Waikiki Aquarium where NOAA Fisheries veterinarians were preparing to conduct diagnostic procedures such as x-rays and ultrasound.