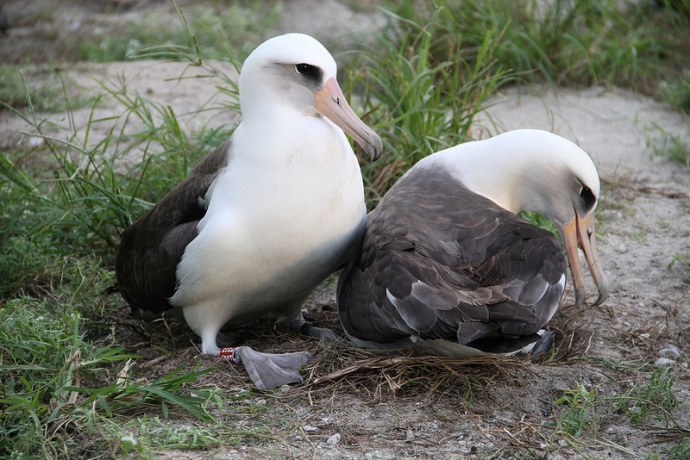 After returning from foraging at sea on November 29, 2012, Wisdom (left) attempts to nudge her mate off the nest for her turn at incubating the couple’s egg.
Photos by Pete Leary/USFWS.

The Laysan albatross known as “Wisdom” is believed to be at least 62 years old, and was first observed incubating an egg at the same area of the refuge when she was just five.  Authorities say she has likely raised at least 30 to 35 chicks during her breeding life.

The latest hatchling was observed on February 3rd by a wildlife biologist who described the bird as a “symbol of hope” for her species.  The information gathered during research is being used to measure the health of our oceans that sustain the birds, and the importance of breeding adults in the population.

Authorities from the National Wildlife Refuge say 19 of 21 species of albatross are threatened with extinction, by impacts that include hookings by longline fishing; ingesting marine debris; being preyed upon by invasive species such as rats and wild cats; and on Midway, lead poisoning of chicks from lead-based paint used in previous decades also poses a risk.

“As Wisdom rewrites the record books, she provides new insights into the remarkable biology of seabirds,” said Bruce Peterjohn, chief of the North American Bird Banding Program at the USGS Patuxent Wildlife Research Center in Laurel, MD in a media statement.

Sue Schulmeister, Manager of the Midway Atoll NWR, said, “Wisdom is one is one of those incredible seabirds that has provided the world valuable information about the longevity of these beautiful creatures and reinforces the importance of breeding adults in the population. This information helps us measure the health of our oceans that sustain albatross.”

The albatross colony at Midway Atoll NWR is considered the world’s largest.  Elsewhere, Ka’ena Point Natural Area Reserve, managed by the State of Hawaiʻi Department of Land and Natural Resources, hosts the only nesting Laysan albatross colony on O‘ahu. 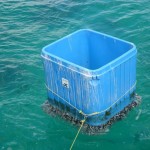 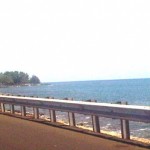