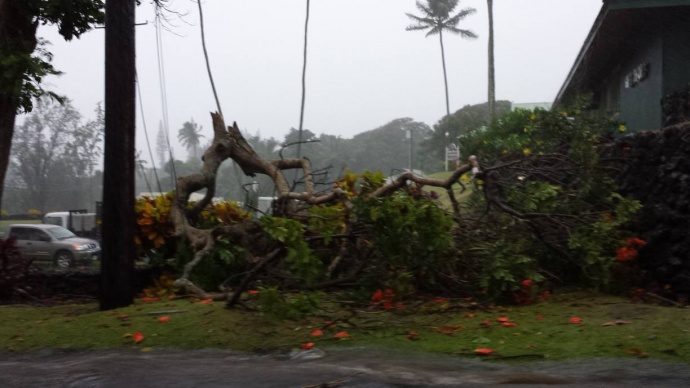 Update 11:56 a.m. 7/30/13: Maui police started intermittent contra flow on Hāna Highway at milepost 28 where crews are still working to repair downed poles and wires. Hawaiian Tel is on scene, estimated completion time is between 5 and 6 p.m.

Update 10:13 a.m. 7/30/13: The road to Lower Nāhiku Village was also blocked last night by large fallen trees; it is unknown whether crews have been able to remove the trees as of this morning.

Update 10:13 a.m. 7/30/13: Piʻilani Highway, the area of milepost 37 at Kalepa Bridge closed. Public Works crews expect road closures and delays along Piʻilani Highway in the Kaupō area over the next two days as crews continue to inspect and repair roads and bridges.