Brigit and Bernard’s: Sausages and Schnitzels Stand Out 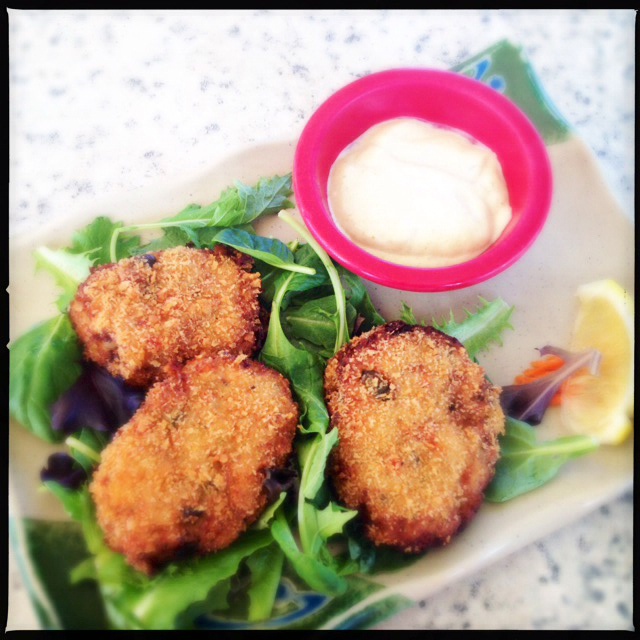 Brigit and Bernard’s Garden Café is pretty much Kahului’s answer to Epcot Center.

Admittedly, you can’t get your picture taken eating waffles next to Minnie Mouse or tour the home of the future, but it’s one of the few spots where you can find Greek, Italian, German, French, Swiss, American and even local style dishes on the same menu.

Granted, just because you can partake in such variety doesn’t mean you should.

We were warned to “stick to the German stuff” and by and large, that’s sage advice.

The Bratwurst Pupu ($7 for pork or $9 for veal) is a solid carnivorous bet.

The cakes are clearly made in-house, but there were no lumps, no lumps, no lovely crabby lumps to found. The net filling is more, well, pulverized than anything, and we wish more of the blue crab flavor shined through.

Did you know Hitler was a vegetarian? 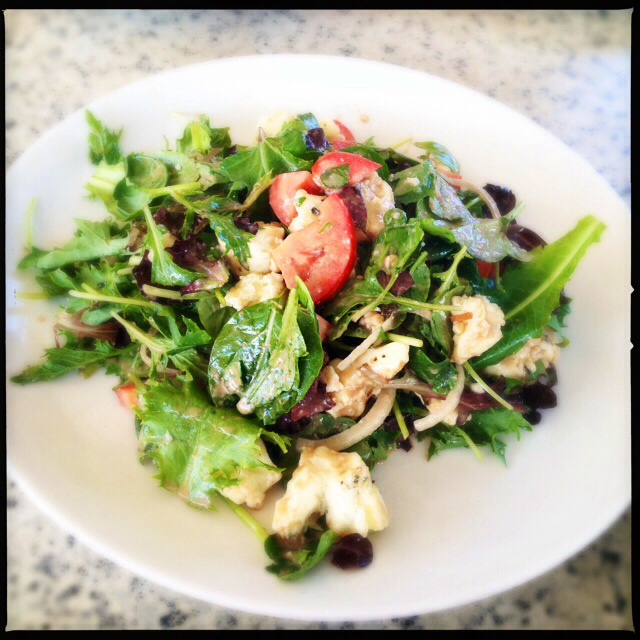 The Blue Cheese and Tomato Salad (large size) is all about blue cheese. Photo by Vanessa Wolf

Apparently sensitive to the suffering of animals and not much else, we reckon he might have enjoyed the Tomato Blue Cheese Salad ($9 small/$13 large).

Kula greens are tossed in balsamic vinegar dressing along with with onions, a few pieces of tomato and a massive – seriously, massive – amount of blue cheese.

However, that’s the best part. We approve.

Service is cordial but leisurely, and if the place is hopping, it can be downright sluggish. There often seems to be only one server working and she’s spread a bit thin even on a slow day. Get your questions and your orders in fast and while you still have her attention or prepare to chat amongst yourselves.

Even expertly prepared German food is a bit inelegant: sausages, potatoes, meats cooked with vinegar. It invites words like “stick to your ribs” and “hearty” more than images of candlelit marriage proposals; well, unless the person you’re proposing to is or eats like Godzilla. 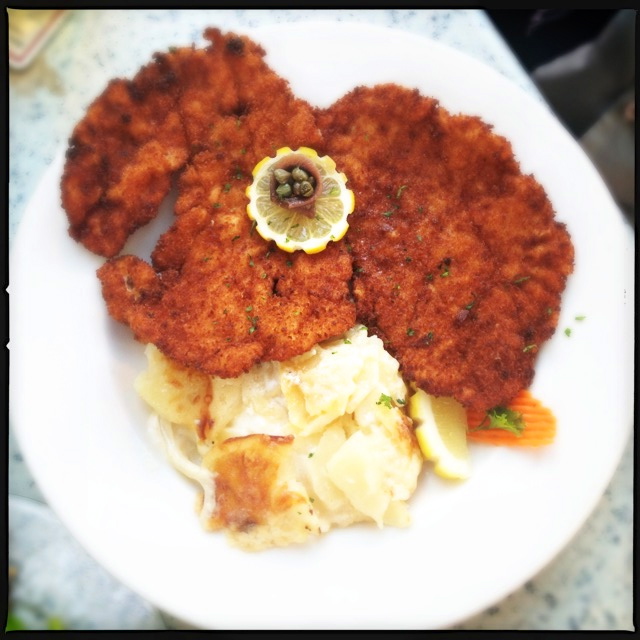 This Weiner Schnitzel is shaped a bit like China. Photo by Vanessa Wolf

If you’ve never had schnitzel, rest assured, local folks: you have. It’s Europe’s answer to tonkatsu or chicken katsu and there are about a dozen versions depending on the preparation, sauce, or filling.

Brigit and Bernard’s Pork Wiener Schnitzel ($17) is exactly as it should be: a giant piece of thinly-pounded pork is breaded and fried. It comes with a lemon slice and a some capers wrapped in an anchovy wrapped in a mystery.

The large cutlet is accompanied by a simple house salad and some decadent potatoes au gratin. Filling? You better believe it.

Rub your belly if you must, but for Pete’s sake don’t make any noises.

The Pork Jaeger Schnitzel ($20) has nothing to do with Jagermeister – and for that we are all undoubtedly grateful – and is basically the exact same thing as the above except with a home style mushroom and bell pepper gravy on top. 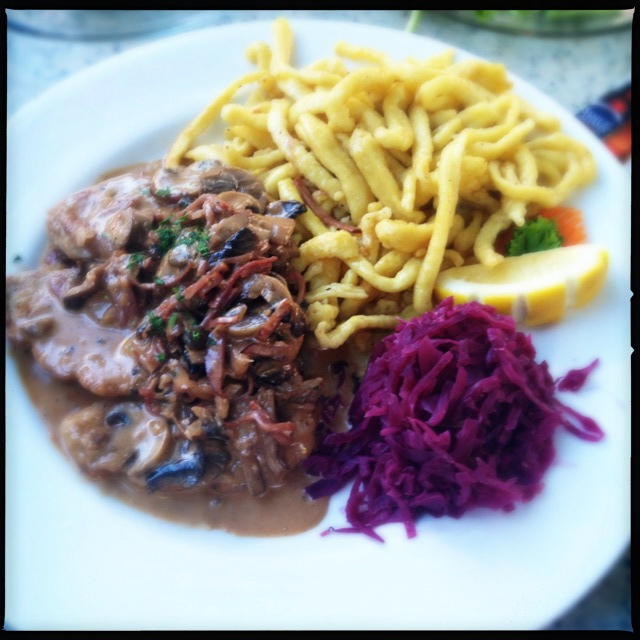 The cabbage accompanying the Jaeger Schitzel wasn’t our favorite, but it sure is purty. Photo by Vanessa Wolf

To keep you on your toes, it’s accompanied by spätzle (basically egg noodles) with a predominant nutmeg flavor and braised red cabbage that was strongly spiced with cloves.

Occasional specials round out some of the German classics you may be missing like Sauerbrauten or meatloaf.

Bernard is apparently Swiss, and we hope he also considers adding pretzels, raclette and chestnut-based vermicelli (the dessert) to the menu: we’d come just for some of that.

In the meantime, if you crave such meat and potatoes-type sustenance – and lots of it – but lack the necessary passport or funds to get to Bavaria, there is good news, meine Damen und Herren.

Oktoberfest has come to you.

Starting today, on Fridays and Saturday nights from 6 p.m. to close through October 26, you can pig the heck out at Brigit and Bernard’s Oktoberfest buffet. 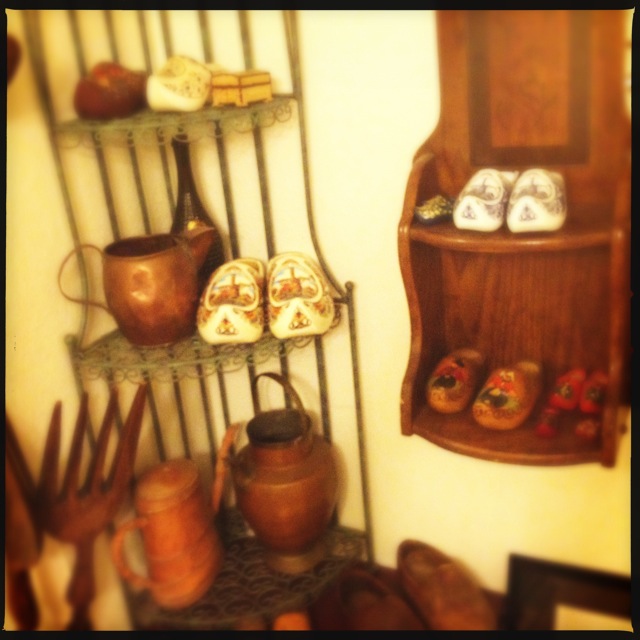 All kinds of clogs await you in the ladies’ room. Perhaps Brigit is Dutch? Photo by Vanessa Wolf

For $38, you can gorge on many of the “stick with the German food” highlights from the menu like veal and pork bratwurst, spätzle, and sauerkraut as well as sauerbrauten, roasted chicken or potato salad.

If chewing is too much work, Spaten Oktoberfest beer is being poured along with the usual – and billed by Bernard via the menu as the alleged “best beer in the world” – Bitburger.

The majority of the small café’s seating is in the outdoor beer garden. The restaurant is in a pretty nondescript section of Kahului, but they’ve made clever use of skis and wood fencing so you hardly notice.

Brigit and Bernard’s Garden Cafe is open Monday through Friday from 11 a.m. to 2:30 p.m. and Tuesday through Saturday from 5-9 p.m. 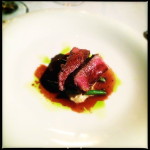 Makena Throws Offering Into The Hat for Oktoberfest 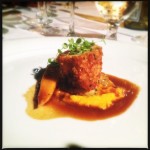