Kualapu’u Cookhouse: a Molokai Must 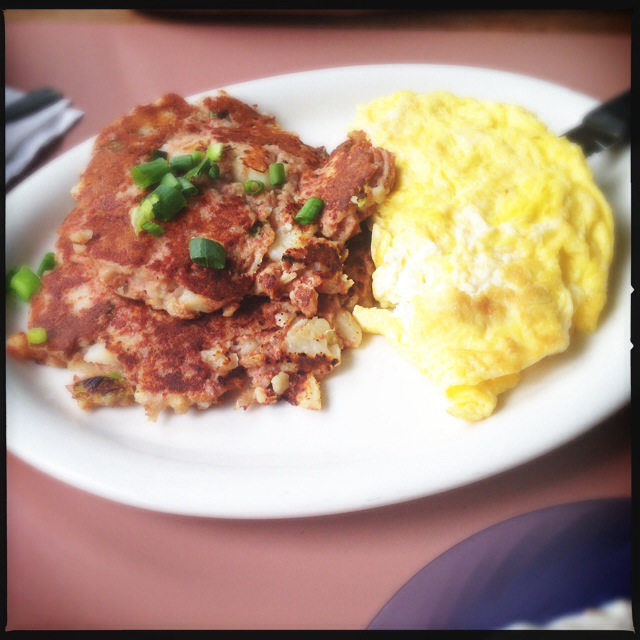 You know what they say about “when in Rome.”

When on Molokai, expect to find plenty of locals retrieving “to go” orders, catching up on the latest news and getting their grinds on at Kualapu’u Cookhouse.

Here you can find plenty of time to think your own thoughts and acclimate to the leisurely pace of life on the “Friendly Isle” in humble but welcoming surroundings.

Although Molokai itself is hardly on the beaten path, the little green house-turned-restaurant is in a residential part of the island near the coffee plantation. 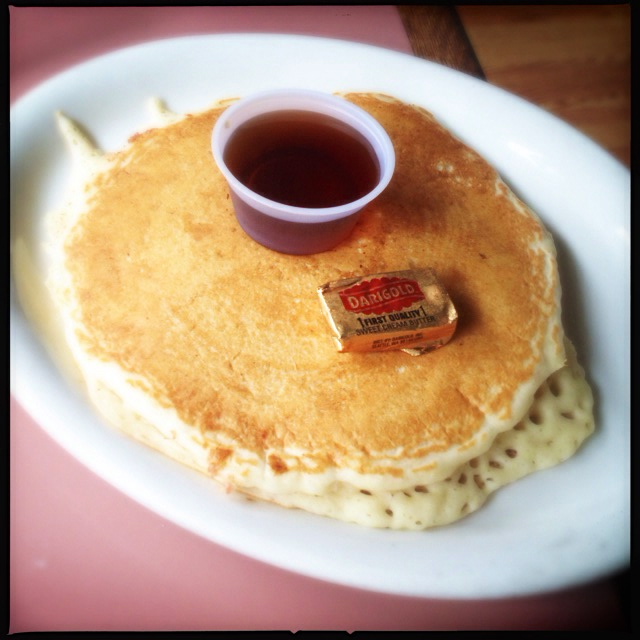 The Pancakes aren’t cheap, but they’re good pancakes if that’s what you’re into. Photo by Vanessa Wolf

Still, you’ll probably pass by at least once on your way between Kaunakakai and the Kalaupapa Peninsula or the island’s western end.

We started with the Homemade Corned Beef Hash Breakfast ($9.50).

Ground corned beef, slices of potato and green onion are combined into a patty and fried. It’s a less chunky “hash” than you might be used to, but the flavor is good.

We ordered our two eggs scrambled, but what arrived was more like a naked omelet.

When we inquired on a redo, we were told that would “take a long time.”

Thus, we can’t say whether that’s a common preparation or just a goof, but if you’re not one to risk it, maybe order them cooked some other way. 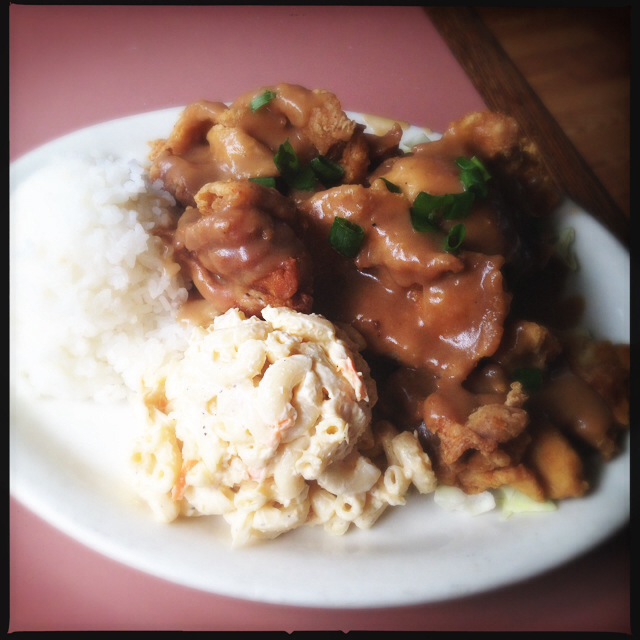 Hopefully you’ll luck out and the Boneless Country Fried Chicken will be offered during your visit. Photo by Vanessa Wolf

In contrast, our single pancake ($4.50) was a fluffy cloud from carb heaven.

At this point you might be all, “Whoa! Four fiddy for a single pancake!?” but it’s as good as pancakes get and you’re on a remote island in the most isolated archipelago in the world and you didn’t have to cook it or anything, so simmer down and enjoy the ride.

The Biscuits and Sausage Gravy special ($6.95) was rock solid.

Sure, maybe the two biscuits were kinda dry and a bit reminiscent of rocks, but the gravy – creamy, flavorful and every inch what you’d find in a diner in the Deep South – soon permeated the parched bread and evened it all out.

Better yet, our over-easy egg ($2) was perfectly prepared.

Portions are large: We departed that morning beyond full and with leftovers in tow. 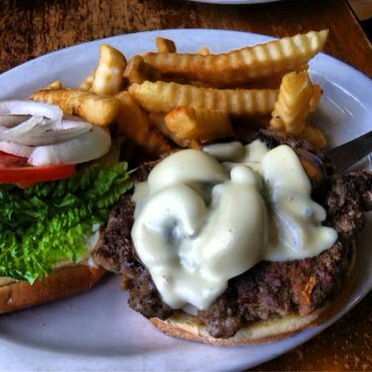 After our rental house situation turned out to be über Blair Witchy – if you’ve never been gripped with a fear of being surrounded by and ultimately gored to death by possessed axis deer but would like to, give us a shout – we decided to make the Kualapu’u Cookhouse a regular hideout/refuge/home away from home.

Nothing wipes away the tears and says “I love you” quite like deep-fried bird.

The Boneless Country Fried Chicken ($12.95) was on the specials board all three days we stopped in. We’d vote to add it to the permanent menu.

Reminiscent of the excellent fowl prepared by JB’s in Wailuku, this one comes smothered in brown gravy.

We weren’t expecting that and it renders leftovers a bit soggy – maybe ask for it on the side? – but despite its unexpected presence, it was seriously some of the best brown gravy we’ve ever had in the islands. 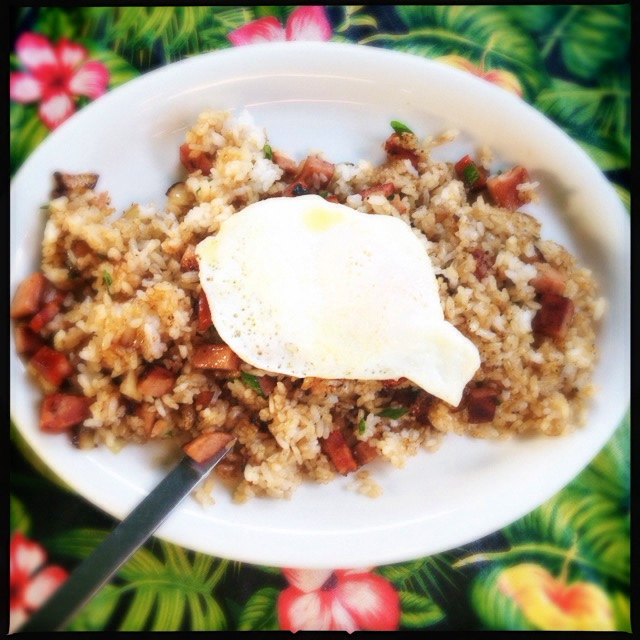 The accompanying mac salad was also exemplary with a perfect balance of mayo and black pepper.

We sampled the Mushroom Swiss Burger with Fries ($10.50).

The beef isn’t local (per the waitress), but the –we’re guessing – 1/3 pound burger is juicy and satisfying.

Those anticipating a Four Seasons-ish ambiance, adjust your expectations accordingly: Kualapu’u Cookhouse rests firmly at the intersection of super casual and family barbeque.

The indoor seating features plastic folding chairs and the outdoor area offers communal picnic tables and a bathroom bordering on an outhouse. Service is friendly, slow and not afraid to bust into a song along with the radio. 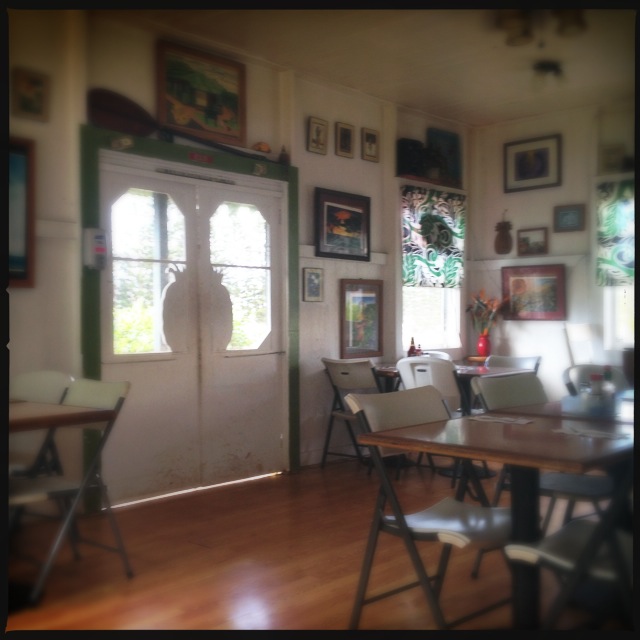 An interior view of the restaurant. Photo by Vanessa Wolf

Did we mention it’s slow?

As the menu unflinchingly declares: “If you’re in a hurry, you’re on the wrong island!!!”

On our final morning, we tried the Cookhouse Special ($9.95) – fried rice with an egg on it.

Greasy, fatty and tasty, this rice is laden with onion, Portuguese sausage and Spam. The over-easy egg was perfect. We were more than satisfied and once again had leftovers for the road.

Blame it on a long, calorie-burning night of shuddering in fear while worrying we’d wake up surrounded by ominous stick art made by an angry necromancer, but our dining companion decided to go big before going home and upped the “Three Choice” omelet ($12.50) to six choices (each an additional 75 cents). 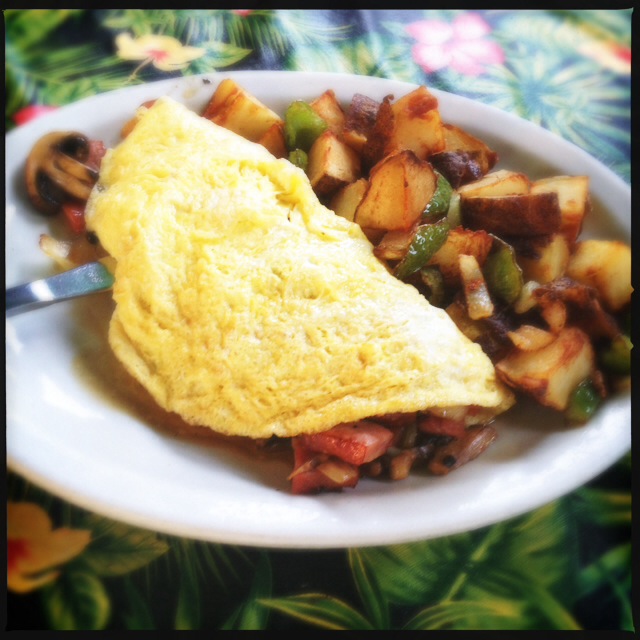 The Omelet comes with your choice of rice or home fries. Photo by Vanessa Wolf

Overall, it was well-prepared, but note each bite released a squirt of oil from the (otherwise perfectly cooked) eggs.

This is not a complaint if you’re into full-fat or paleo eating.

All told, Kualapu’u Cookhouse is something of a diner, something of a plate-lunch joint, but consistently a notch above your expectations from such places in terms of variety and preparation.

Everything’s a little bit better than what you’d presume and in portions that will fill you beyond your next regularly scheduled meal.

Kualapu’u Cookhouse is located at Highway 470 and Uwao Street in Kualapu’u on Molokai. They are open Tuesday to Saturday, 7 a.m. to 8 p.m. and Monday and Sunday 7 a.m. to 2 p.m., although please note we experienced slightly later opening hours in person. 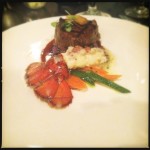 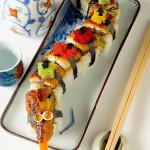